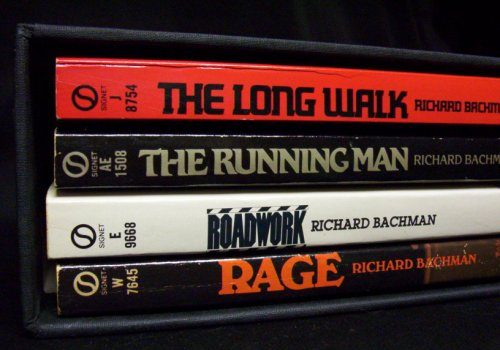 Four early novels from Stephen King were written under the name Richard Bachman, in order not to over-saturate the horror market, to give King another outlet, and to answer the question of which is more important to success, talent or luck.  It’s an oddity that our favorite oddball writer can afford, and there have been a total of seven Bachman books released, not including this collection of Richard’s first four.  King is at his best when he writes novellas, and these four early experiments exhibit how that skill grew into genius, even if they don’t all resonate at the same strength.  For a casual fan, these stories, with the exception of one, can’t be considered must-reads, but they do help aficionados of King’s work to dive even deeper into his mind, which might be a dark place, but which also remains one of our absolute favorite places.

In ‘Rage’, a high-school boy who grows angrier by the day finally cracks and attacks one of his teachers.  Upon his return to school, he takes a classroom hostage, killing multiple teachers in the process, and holds what can only be described as a come-to-Jesus with his classmates, most of whom understand that depth of his sense of bitter betrayal at the hands of a world that doesn’t want him.  In ‘The Long Walk’, a dystopian society is run by a militaristic tyrant, and the only real way out of poverty in through the annual Walk, in which 100 boys march until they drop and are shot, the last winning a lifetime supply of everything, but at a mental cost that’s not nearly worth it.  In ‘Roadwork’, an aging man who has recently lost his son is about to lose his family home to a freeway project.  His refusal to budge leads him down a path toward murder and madness.  And in ‘The Running Man’, the divide between rich and poor has become so stark and so deadly that those in the lower class must participate in demeaning and murderous television games just to get by, a situation that could lead to bloody revolt.

‘The Long Walk’ is the only spectacular story here that must be read; the others are interesting but don’t pack the same punch.  Interestingly enough, ‘Long Walk’ was the first book King ever wrote, long before Carrie, when he was a freshman in college; it wasn’t published until years later but wow, I wish I had that much talent when I was 18, 19 years old.  That just shows King’s skill, that novella is amazing, among the best of his entire bibliography, and it comes from such a humble beginning.  ‘The Running Man’ in next best, and it was later turned into a terrible Arnold Schwarzenegger movie that resembles it not in the least, so there’s that.  ‘Rage’ and ‘Roadwork’ are just OK, not bad, just OK, full of anger and madness and explosive emotion, but not constructed as well as King would later exhibit an ability for.  Again, if you’re a casual fan of King and his take on the horror genre, you may not care enough to delve into his past; if you’re a super fan like me, read on, because the more you know of the pieces of his world the more you can appreciate every awesome angle.