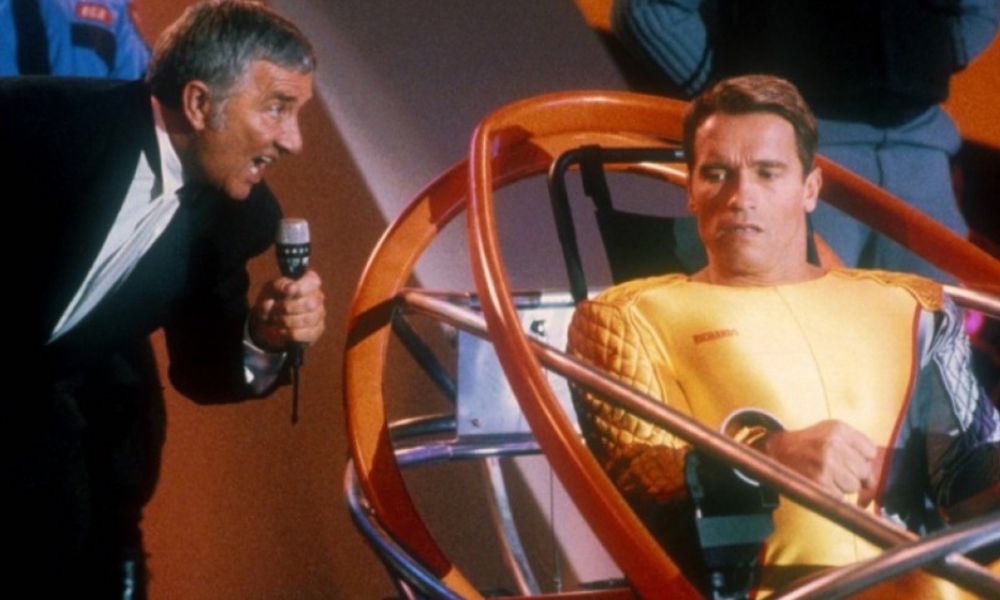 I am a big Stephen King fan, as I have said a million times, and as you well know if you read my reviews with any frequency.  I’ve read so many of his books, am working on reading every single one during the pandemic because, well, time, and of course I’m a film critic, so naturally I’ve seen a ton of movies based on King novels.  They don’t always work out very well, sometimes it simply doesn’t translate, and that’s never been more apparent than with The Running Man.  The novella is only mediocre, fine by not amazing, but the film version is god-awful.  Not only does it have absolutely nothing to do with the book, but it also requires Arnold Schwarzenegger to be a good actor, which we know isn’t possible, so I think “doomed” would be the word we should be looking for.

Ben Richards is an ex-soldier who was sent to prison for not killing innocent civilians.  With food and fuel shortages, that kind of empathy can’t be tolerated in California, the general public needs to be eliminated if they step out of line, and the dystopic future rolls on and on.  To keep the masses pacified, a giant conglomeration runs the most popular show in the world, The Running Man, where viewers get to see “evil criminals” be killed by talented hunters in the remnants of a blasted city.  Richards finds himself in the clutches of the television program, and he & his friends are sent into the game to die before a live studio audience.  But resistance to this atrocity has been mounting underground for years, and Ben might be the leader they’ve long been waiting for, if he can survive long enough to find them.

So …much …wrong; my god.  First of all, Paul Michael Glaser is Perchik from Fiddler on the Roof and more widely known as Starsky from Starsky and Hutch.  He only directed a couple movies, including The Running Man, Kazaam (lol), and Amazons, a TV movie about “beautiful, large-breasted female warriors”.  That’s just embarrassing, and watching this movie makes it all even more so, because it’s so hideously and ridiculously bad.  It’s based on the King story but follows it not at all, making the show more about arenas, sports, gladiators, that sort of the thing.  The character has the same name; that’s about where the similarities stop.  Then they cast Arnold, which I understand, he was big in the 80s, but he is a terrible, terrible, TERRIBLE actor, and can really only pull off Predator roles and the like.  For the rest of the cast, they decided on …questionable actors and celebrities from other mediums?  Maria Conchita Alonso was a model, Richard Dawson was a game show host, Jim Brown from the NFL, Jesse Ventura from the WWF, Mick Fleetwood of Fleetwood Mac; just, why?  This entire film is a giant question mark, a smudge rather than a mark, and one that should probably simply be wiped away.