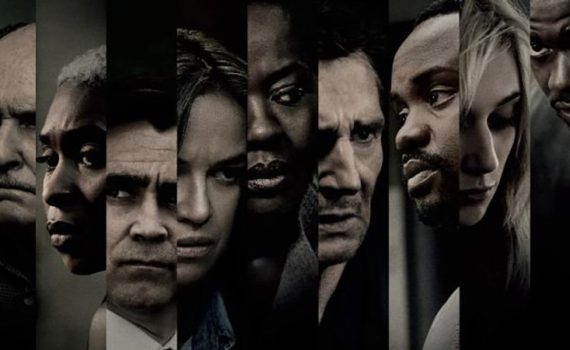 Steve McQueen is focused.  Other than a variety of short films he has directed, he has created four feature films over the past ten years: Hunger, Shame, 12 Years a Slave, and Widows.  That’s dedication to quality right there, no rush, no fluff, just quality, and I can’t applaud that enough.  He looks into the darkness for us and translates what he sees into something that can be put on screen, and I’ll permanently be ready to watch was he does next.  With Widows, he does something original with the gritty, criminal storyline that won’t go unnoticed; he makes it complicated and frenetic and unsound and dumb, because the underworld isn’t glamorous, it’s downright disgusting.  We’ve never seen a heist drama like this before, layered and confused, and I’m not sure we ever will again.

After a job gone wrong, four thieves are killed in a firefight with police on the south side of Chicago.  Along with their bodies, 2 million dollars in cash is burned in the aftermath, the loot they stole from the powerful Manning brothers.  Now the Manning’s want their money back, in the form of a payment from the widows the men left behind.  Veronica is a particular and wealthy woman, Linda is a working mother, Alice is a trophy wife with nowhere to go, and Amanda has been left with an infant; none of them are in a position to stand up to the likes of the criminals who are now breathing down their necks.  If they want the brothers gone, they’ll have pull off Veronica’s late husband Harry’s next score; a 5 million dollar job involving a safe room surrounded by security.  They don’t know the ropes, but they know the consequences of failure, and it’s simply a check they can’t cash.

The summary almost makes the movie seem typical, but I assure you it is far removed form the normal heisty, shoot-em-up dramas we’ve encountered so many times through the years.  Widows is a fresh take on the genre, a breath of clean air to push away the stench of past failures, and somehow also a homage to all those successes who have come before.  McQueen is a master of mood and despair, sowing bleak uncertainty through every moment until you want to turn away, but you simply can’t.  How he did that with this story is remarkable, and there are enough twists to make things even more interesting, while somehow never letting the plot turn into a gimmick.  The cast is incredible: Davis, Farrell, Kaluuya, Liam Neeson, Michelle Rodriguez, Elizabeth Debicki, Robert Duvall, Jacki Weaver, Garret Dillahunt, Kevin J. O’Connor, Matt Walsh, Brian Tyree Henry.  And the action is intense in spurts, with flashbacks and side stories interspersed to keep things moving, which worked perfectly to keep the film fast-paced while also allowing it to wallow in the misery of the characters.  Widows is one of the most solid pieces of cinema I’ve seen this year, with a tantalizing aftertaste that makes me want to watch it again and again.