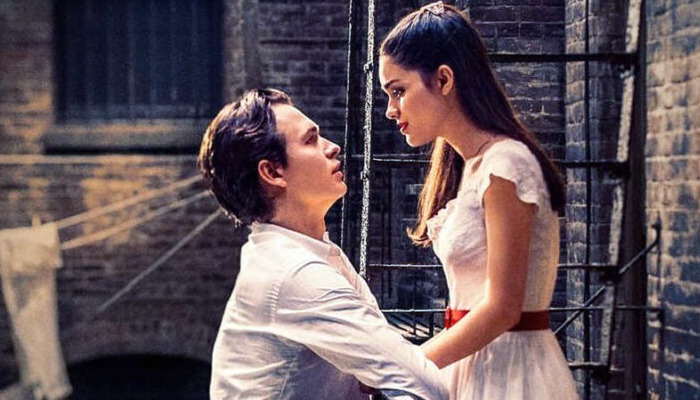 This version of West Side Story might be remembered down the road as a stunning modern musical, but, here in the moment, its flaws might be speaking louder than its fantastic moments.  We know about the play, which is perfection, we know about the original film, which is iconic, and now we’ve seen the remake, which has wonderful elements to be sure, but seems to be weighed down by the things that didn’t go right.  Perhaps the floor was high and the ceiling low; the source material is so spectacular, what could really go wrong, but the bar is set so soaring, who could you ever manage to reach it?  With a few key mistakes and maybe an avoidable bungle or two, but also with a base that we already loved, this redo arrives with mixed emotions and yet plenty of dazzling delights.

The tale is as old as Verona, as classic as Doc’s, and as moving as ever.  On the streets of New York City, on the West Side, where immigrants fight for room & jobs among the squalor of tenements & the resistance of the natives, two gangs emerge to face head to head: the Jets and the Sharks.  The Jets have been fighting for this territory for years, led by the charismatic Riff.  The Sharks are Puerto Rican and are new to the city, but fight hard under the direction of Bernardo.  A great rumble is scheduled for a winner-take-all match, but a star-crossed love that came out of the blue might blow the whole thing up before it happens.  Riff’s best friend Tony and Bernardo’s sister Maria fall so hard for each other that they just might be able to break the cycle, bring the groups together, and change the fate of young New Yorkers for miles around, if only their love can prove strong enough to break through so much hate. West Side Story is not only nominated for Best Picture this year, but could be considered a frontrunner, which I don’t see happening.  It’s simply too difficult to give the prize to a film that was already a film and already a musical before that; there’s only so much originality that you can bring to such a project.  On the other hand, Spielberg brings every once of his genius to bear creating this remake, and that’s definitely worth a lot; I could see him winning Best Director.  The film is gorgeous, shot perfectly, made to look so magical, each scene is excellently built, and as a film, just as a film, it’s a brilliant, breathtaking extravaganza that deserves everything you can throw at it.  BUT, I do think mistakes were made, and given that the source material isn’t exactly new, any little problems stop the whole thing from being excellent, because excellence was already sort of given; to mess that up really isn’t acceptable.

First, Elgort was a bad casting.  He didn’t fit in with the Broadway feel, he looked out of place, his singing was auto-tuned to distraction, and I wish the entire project would have been sang/filmed in the style of the new Les Mis; on stage, with mistakes, with emotions, no sound studios, just real singing.  The way Spielberg did it felt more like Beauty and the Beast, and that’s not what this show deserves; it’s one of the best theatre productions ever created.  Zegler’s fake accent was also a little distracting; I wish the film had simply been more bare-bones.  Also, I was unhappy with the changes Spielberg made to the songs; Bernardo singing in America, Tony singing in Cool, Rita Moreno taking the entirety of Somewhere.  I really hated that one, although I liked that casting choice; that song works better as a duet, not as a single piece.  But even these quibbles didn’t stop this version from working, just from working perfectly.  Maria was still good, Riff was phenomenal, the dancing was killer, I cared a ton, I loved what my eyes were seeing, I only think that more could have been done to honor the old, hone the new, and craft something for us that was as ridiculously awesome as we wanted it to be.