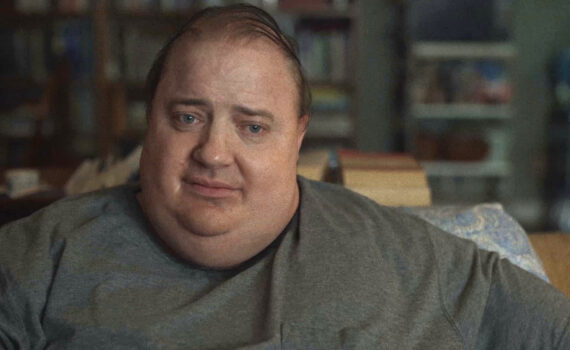 I shouldn’t have to say this, but The Whale is not fatphobic.  It’s not even really about being overweight, it’s much more metaphoric than that, which should be obvious if you’ve ever even heard of Darren Aronofsky or have any idea what depth artistic directors like him enjoy exploring.  And he didn’t write this, it’s a play, and the whale that the title refers to isn’t Brendan Fraser’s character, it’s Moby Dick, which is again a metaphor; I don’t have time to explain it all, nor do I think I have all the explanations anyway.  You’re just going to have to watch the film to see what it has to say, which, by the way, I would highly recommend, since it’s *the* best film of the entire year.

Charlie lives alone and doesn’t leave his house, teaching college writing courses online and behind the blank screen of his covered webcam.  He used to be married, has a high-school-aged daughter, but hasn’t seen her since the divorce, as he began a relationship with a former student and was blocked by his former wife from having any communication with Ellie.  After a tragedy, Charlie has turned completely inward, including not leaving his home, but also resulting in an extreme weight gain, to the point that his friend Liz, who is a nurse, has told him that he will die within days.  In a final effort to make things right with Ellie, Charlie strikes a deal with his angry, teenage daughter and attempts to repair a bond that could have been so special and so strong.

First, this is a play, and that feeling prevails throughout; one location, characters in & out through one door, monologues that would normally feel out of place in cinema.  Seen through that lens first, which I think is very important, The Whale takes on a life of its own, a theatrical/cinematic, captivating life, that seems at once intimate & honest and also grand, and laden with hidden meaning.  This isn’t surface level stuff, people, this isn’t a fat guy being made fun of or made to look sad & stupid.  Charlies is amazing, and his life has been awful, but his outlook has remained hopeful anyway, and his gift to us is what he sees in others.  Fraser played the part perfectly, *perfectly*, and if I had an Oscar vote to give right now I’d hand it to him in a heartbeat.  The other actors were only fine, I almost wish we had never seen them; maybe they stay behind the door and we only hear them, something like that, which would also add to the feeling of Charlie’s isolation.  But Fraser & Aronofsky did enough to make the movie magical anyway; it was sad and sweet, truthful and hard to swallow, it brought forth so many emotions that they were hard to sort sometimes, but I loved that about this film; it was challenging from the first scene.  The Whale is one of those films I want to immediately rewatch, because it has so much to say, and I trust that it will only reveal more to me each time.