Movie Review – The Banshees of Inisherin 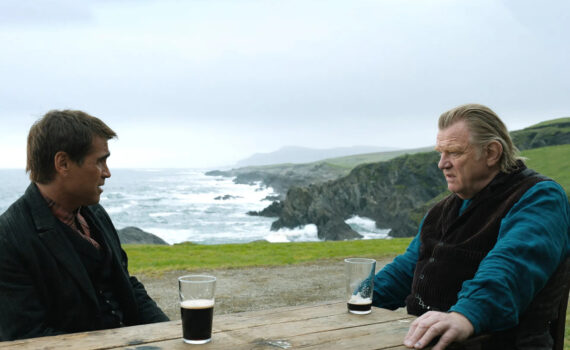 Movie Review – The Banshees of Inisherin

If The Whale is the lead for the Best Actor award, then The Banshees of Inisherin might be the lead for Best Supporting Actor …and Best Supporting Actress …and Best Score …and Best Picture …and maybe even Best Actor, after all.  It’s a clean-sweep kind of film, with powerful punches coming from all directions and no real rivals to stand in its way.  It’s a bludgeon of emotion and talent on display in a fascinating location & time, a real checks-all-the-boxes type of movie, one to salivate over.  All that’s really left is does it connect with you in just the right way or does it swing past your chin; it landed squarely for me, and now I’m seeing Oscars.

One fine Spring day on an island off the west coast of Ireland, Padraic goes down to his mate Colm’s house by the water’s edge to gather him for their daily 2pm trot to the pub.  But this day, unlike every other, Colm completely ignores him, and later, at the pub, continues to pretend he doesn’t exist.  Pressing the issue, Padraic learns a shocking fact; that his best friend in the world has decided, without real provocation, that they aren’t pals anymore, and that he can’t stand the company of his steadfast, somewhat boring companion.  His world rocked, Padraic begins a campaign to solve the bizarre mystery, only to go deeper & deeper into levels of emotion he simply doesn’t understand.

Banshees starts as an addition to the theatre of the absurd; bizarre, comedic, existential, irrational, lacking clear communication, and ultimately revolving in a circle toward its own beginning.  But too much happens along the way to say that it stays absurd throughout; rather, it becomes a tragedy of epic proportions, but on the level of the soul, where our darkest tragedies take place.  Set up this way, so funny at times and so casual, the slaps to the face of pure, brutal, honest, depressing, gut-wrenching existential crisis are all the more impactful, and can be felt so thoroughly, which is exactly why this film is having such an affect on audiences.  It’s so sad, so bleak, but has such moments of beauty and hope; just a wonderfully written story & delivered so well.  Farrell & Gleeson are an all-time pair, perfect together in a way I can’t think that two other actors could accomplish.  Barry Keoghan and Kerry Condon are receiving a lot of attention too, but for my money the tale is best when it centers on the two friends, and doesn’t need the other pair to succeed, making them unnecessary perhaps, even with excellent acting from both.  This is a film that slams its foot down & demands to be heard, and one that will be talked about for years.