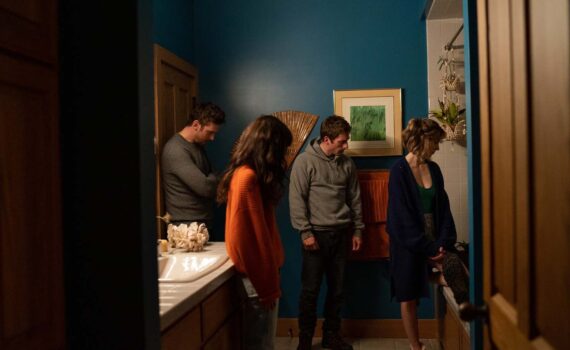 The Rental is a first-time director’s attempt at breathing new life into an old genre, but unfortunately the breath was stale.  This twisted take on what we’ve seen a thousand times before tries to be fresh, but only reminds us of how the style has been done better before, rather than announcing a new generation and where that will take us now.  Dave Franco is a horrible, horrible actor; will he be at the same level directing, or is this just a bout a growing pain that we, unfortunately, had to suffer through as well?

Two couples head out for the weekend to a rental property on the coast, in an effort to get away from their jobs and to celebrate where there work will take them in the future.  Charlie & Michelle are a married couple, the other couple is Josh & Mina, with Josh being Charlie’s brother & Mina being Charlie’s associate.  Well the big house is awesome, the hot tub is running, they brought plenty of booze, but things get real weird real fast when infidelity rears its ugly head and hidden spy cameras pop up in inconvenient places.

It’s a bit like 13 Cameras, but better, but at the same time not.  It’s a familiar genre, blending modern tech with old school horror, and that’s all well & good, if you can do it well & good.  Franco couldn’t; his script, written with Joe Swanberg of improv fame, was lame & stunted & unnatural, which is not the way to put audiences at ease.  We needed better writing, a better mood, and more time given to let us sink into the normal lives of these people, and the bizarre events that swept them away.  As it was, The Rental feels cheap and recycled, with little to liven the party.