Movie Review – The Mitchells vs the Machines 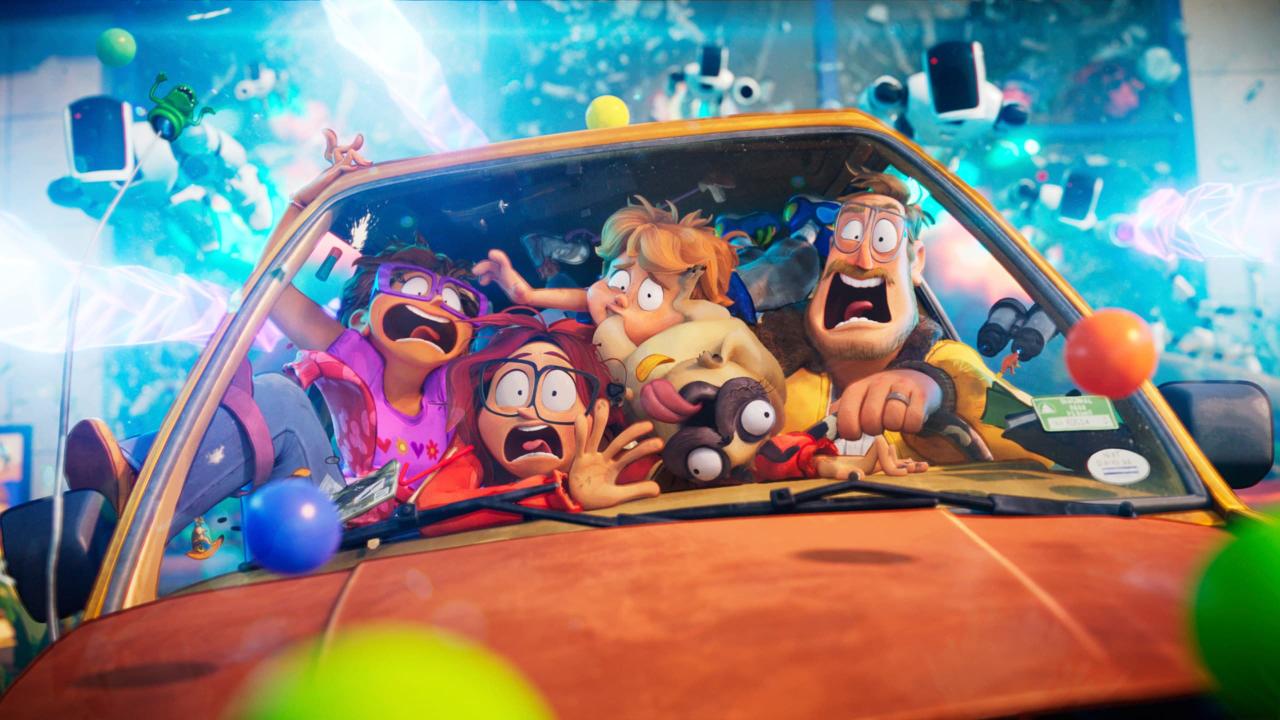 Movie Review – The Mitchells vs the Machines

You should know that, though the film was created by Rianda & Rowe, it was produced by Miller & Lord, who directed Cloudy with a Chance of Meatballs, The Lego Movie, and the 21 Jump Street movies.  The Mitchells vs the Machines feels much more like Cloudy & Lego than I wanted it to, feeding off that frantic energy until it almost exploded under the weight of its own insanity.  Honestly, it resembles those and a dozen other movies; this film doesn’t have an original bone in its entire bloated body.  I might be feeling extra harsh, and I think I know the reason; I really wanted to like this, for my kids to like this, for this to be the best animated film since Spiderverse.  But it simply isn’t/wasn’t/couldn’t, and that’s a real shame.

As Katie grows older, she realizes that she & her family are pretty weird.  Her dad is a burly nature enthusiast, her mom is always extremely positive, her brother is obsessed with dinosaurs, and Katie wants to be a filmmaker, though her early work is rather …unique.  But being unique doesn’t bother her, especially when she gets in to film school and realizes that so many others there will be just like her; strange, but in a good way.  Now if she could just get her dad to jump on board; they used to be close, but now they’re drifting apart.  Nothing an impromptu family road trip won’t fix, or at least until, at the same time, our cell phones turn against us and the robot uprising begins.  Wait, what?  Yup, the robot uprising; Katie just wanted to make movies, she didn’t want to live through one.  She and her family might, somehow, be the world’s only hope, which comes as much of a surprise to them as it does to the rest of humanity.

There are great pieces to MvsM, which is why so many people got so very excited about it and are claiming that it’s the best thing since Inside Out.  It’s not, it’s simply not, but I can actually see why they think that; it’s a pretty tricky little nugget of a film.  First, the animation style is awesome, very fun, and combines mediums in a cool way.  Second, the story has real heart behind all the action, it has something honest to say under all the jokes, and that’s rare.  Third, the robots & explosions & gags & surprises & computers & climaxes are all quite intense and eye-popping, you really can’t look away and will most definitely not get bored.  That’s all to the film’s credit, there are reasons to watch, my family had a good time, it’s that kind of flick; I just want the world to know that there are problems too.

I better address first that I can’t stand Danny McBride, and I don’t like Maya Rudolph that much either.  Constantly hearing McBride try to act his way through a paper bag through a microphone was torturous; the guy sucks.  Not only that, but his character was a complete Mr. Incredible clone, minus the cape, from the big chest to the inability to understand new tech, and it was pretty lazy not to make him more interesting.  Which brings me to the biggest hurdle I had in loving this film, and what ultimately tripped me up; it’s shockingly derivative.  Big Hero 6, Next Gen, Incredibles 2, that story of technology and family and saving the day; we’ve seen it a thousand times.  I didn’t see much of what’s new here, only recycled plots I’d viewwed before, and that reliance was apparent when the film constantly reran its own scenes, the few it knew how to do well, playing the same music, plugging the same videos, making the same jokes, touching on the same themes, over & over again.  It’s not that MvsM isn’t fun, of course it is, and I’d recommend that any family check it out; that’s the target, the family unit, watch & learn & feel together.  It’s simply not a high-end, upper-tier, animated instant classic, which is exactly what I wanted it to be and what some are calling it.  Lower the bar, enjoy the celebrity cameos, and have a, bumpy-but-entertaining ride.