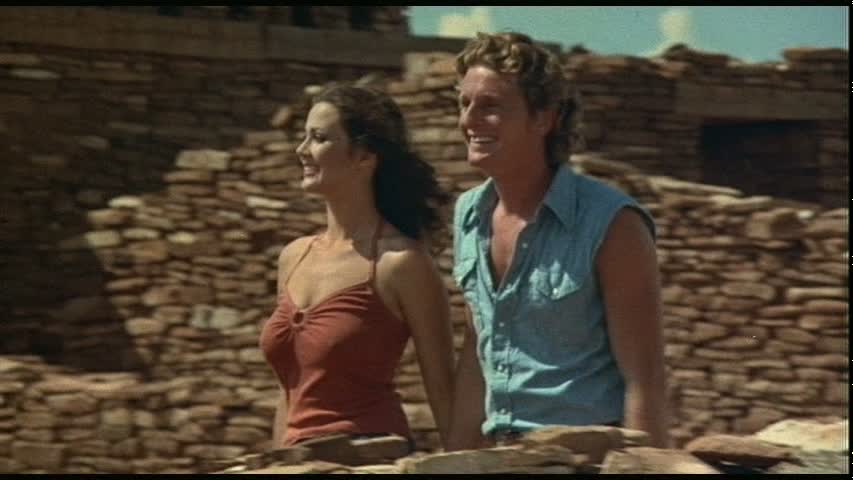 Lynda Carter’s first feature film was Bobbie Jo and the Outlaw, and boy is it a doozy.  Not only does she show her boobs, play guitar, shoot a machine gun, and scream obscenities at police, but she does it all while holding her head high in a way that you would assume isn’t possible, considering the fact that this movie is about the worst ever made.  That must say something; she’s by far the best part of the film, doesn’t seem like she minds getting a little dirty, and somehow comes out a star (thanks to Wonder Woman of course, but still).  Bobbie Jo is an experience, I guess, if a wildly weird and wonky one.

Bobbie Jo is just a simple country girl from a small town but with big dreams, if only some hero would come driving through and sweep her off her feet, taking her to all the place and showing her all the experiences she ever imagined.  Well, as luck has it, in rolls Lyle Wheeler, with a quick gun and some lovely curly hair, although he isn’t exactly as heroic as he lets on.  In fact, the fancy car he’s driving is stolen, and the law will soon be after him, setting in motion events that will make him, Bobbie, and all their friends the most wanted bunch of crazy outlaws in the whole dern state.

So, of course this movie is bad; you can see that coming from the opening scene on.  It was sure stylish though: the cowboy motif, the fast cars, the Bandit & Hazzard action, which would actually come after, so maybe there’s some credit to be given here.  But not for the acting, the writing, the direction, the filming, the music, or the dialogue though; those all sucked.  They used the same two crappy songs the whole movie, it was just one gunfight after another by the end, and the plot was nonexistent about halfway through.  The only reason to watch is Carter, who is beautiful and surprisingly talented, even against such a terrible backdrop and with completely awful complimentary pieces.  Bobbie Jo is best avoided, unless you’re simply morbidly curious.