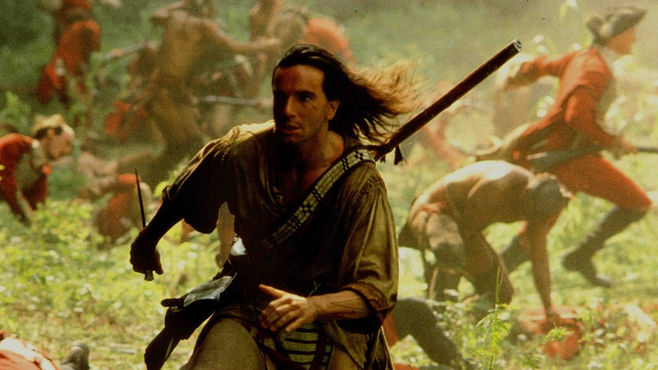 I think we can all agree that Daniel Day-Lewis is one of the best actors of all time.  Some would say that he’s the best actor of all time.  It’s hard to make such a concrete claim, but it’s also hard to argue against it.  His performances are iconic, and when he becomes a character we forget that we’re watching an actor.  My Left Foot, The Crucible, Gangs of New York, There Will Be Blood, Lincoln; not all of these are the greatest films, but if you’ve seen them you’ve seen Day-Lewis put on a clinic.  Not to be forgotten, however, if one of his finest performances; Nathaniel “Hawkeye” in The Last of the Mohicans.  It is an extremely challenging role, as it has surprising depth, and yet he does it with an ease that is amazing to watch.  And this time, the rest of the movie kept up, creating a film that is as great as its lead actor.

Based on the novel written by James Fenimore Cooper, this epic tale is as breathtaking as the land in which it is set.  The events take place during the French and Indian War, a conflict that decided the fate of both the American colonies and Canada.  Both England and France were vying for control of the New World, each collecting Native American tribes as allies.  The Hurons fought alongside the French, while the Mohawks chose the British.  Two Mohawk trappers and their adopted orphan Nathaniel travel the New York countryside, avoiding the trouble between these two great nations.  When they come across the tracks of a Huron war party, they are swept into the struggle against their will.  Having saved the daughters of a British Colonel, they then travel with them to a nearby fort, where their paths begin to point toward a final conflict in which all bonds of love, loyalty, and independence will be brutally tested in a harsh land.

This is one of my favorite films, top twenty for sure.  It has everything I’m looking for from a movie: 1) great acting, especially from Day-Lewis but also from Waddington.  2) an epic background and historical context that make everything feel more real.  3) one of the best film scores ever produced, with arrangements that perfectly compliment the film.  4) a love story that doesn’t feel forced or silly.  5) action that is fun to watch but also isn’t insulting to audiences.  6) wonderful film-making, editing, and direction.  All the pieces fit together so smoothly and there’s something for everyone to enjoy.  And nothing is over the top; not too much blood, not too much kissing, not to wordy.  It’s just an overall excellent film that is superior in so many ways to so many others.  I feel confident in saying that you will not regret watching The Last of the Mohicans.

Hurray! My first ‘You Vote – I Review’ victory!

Now I really want to watch this movie…may have to settle for the soundtrack for now.

The poll isn’t keeping track anymore, it keeps resetting and I can’t figure out why.