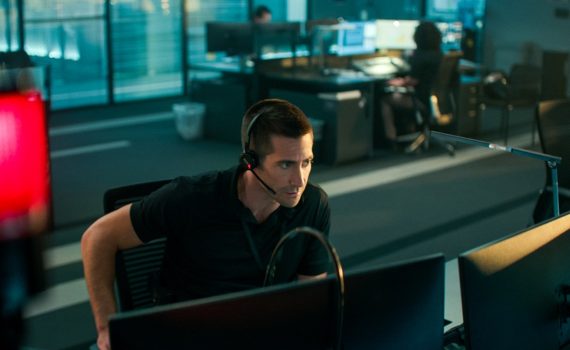 The Guilty is Antoine Fuqua’s best film since Training Day, maybe his only good film other than Training Day (well, can’t forget Southpaw), and could perhaps end up being one of the strongest films of the year period; not bad for a one-man show straight to Netflix.  That’s the power of Fuqua’s vision and Gyllenhaal’s talent, when the stars align correctly at least, because they don’t always, but luckily they do here.  The Guilty is curious, it’s layered, and it’s heavily dramatic; not bad for a 90-minute thrill-ride that never leaves the office or barely even the chair.

Joe Baylor is a reassigned police officer who is now answering emergency calls instead of walking his normal beat.  That story is revealed as we go along, but suffice it to say, Joe does not want to be here but there’s a good reason why he’s not allowed on typical duty.  He’s a flawed cop, maybe a bad one, that’s to be determined, but, regardless, he better get his head in the game, because L.A. needs his help.  Specifically, Joe must react correctly when a woman calls on her cell phone and stealthily lets him know that she had been abducted.  He kicks into action, crossing the lines (and his new job description) many times, but always with an eye to solving this dynamic, dangerous case, before it is very quickly too late.

That this entire film is set in one place, dealing with one emergency, with one actor doing all the face work, is pretty impressive.  That they pull it off without making the movie boring or gimmicky is something else entirely.  Think Phone Booth, but with Jake instead of Colin, and you’ll have some picture of what’s about to take place; high drama on a phone call, not going anywhere, just laying in the moment, and letting that moment spiral faster & faster & faster until you’re sweating too.  It should be noted; this is a foreign film remade, which isn’t uncommon, but does make it unoriginal, so if that’s the bone you want to pick, have at it.  Otherwise, Gyllenhaal carries the weight, I was invested the whole way, there are standard pieces galore, but they actually help audiences feel comfortable instead of rubbing us the wrong way.  For a quick Netflix watch, this is about as good as it gets.