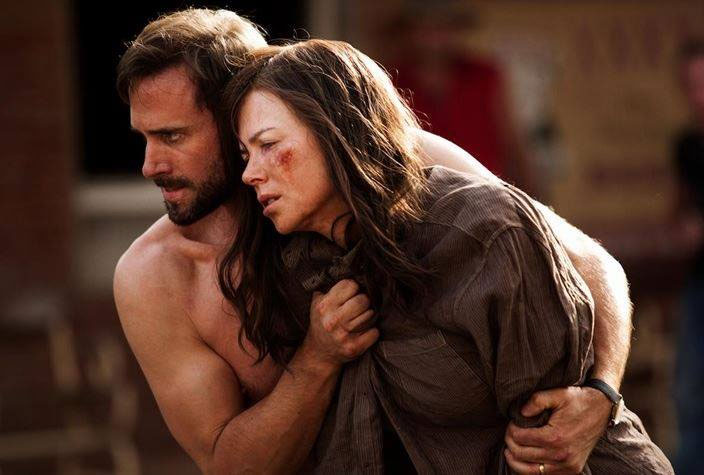 Strangerland has an obvious casting problem.  Kidman, Weaving, & Fiennes are all excellent actors, established professionals, recognizable faces.  They’ve had iconic roles, been a part of award-winning films, made their brands popular, and have, overall, succeeded at their craft.  They are also all English, two of them having Australian roots, so their placement in this film would seem perfect.  But there’s one problem; each of them is known for being icy.  Kidman, the Ice Queen herself, cold and unobtainable.  Fiennes, the dramatist personified, Shakespearean to the core.  And Weaving, who is best known for playing a computer projection.  Talents all, but not the most human & loveable, which isn’t a problem in every film.  It is here though, this being a story of action, reaction, panic, despair, and, above all, humanity.

Having just moved to a new area to escape a bit of trouble in their old life, the Parkers are attempting to settle in.  Matthew has a job in town, his lovely wife Catherine stays at home, fifteen-year-old Lily flirts with the boys, and young Tommy tries to fit in.  But this idyllic facade is covering too many secrets.  The family left their old home when Lily had an inappropriate relationship, Tommy walks around at night instead of sleeping, and Matthew & Catherine no longer share the same bed.  So it’s not exactly a surprise with Lily goes missing, but the fact that Tommy is gone as well raises concerns.  And the longer they’re gone, the more serious the situation becomes, ultimately needing the attention of local cop David Rae, a man with his own issues.  As the adults try to sort out their lives and find the kids, time begins to slip away, and long-buried skeletons begin to rise from well-hidden closets.

It’s a typical thriller that we’re presented with; the kids missing, the parents not happy, the local cop trying to help while dealing with his own stuff, the town getting involved.  And for amateur director Kim Farrant, it was a good choice to stick to the standard script, to present the same old emotions.  It made the film a bit predictable maybe, but not awful.  What wasn’t great was the cast, with too many lifeless moments.  Weaving was the strongest by far, with a solid performance, though not one that will blow you away.  Kidman was as sexy as always, and the film relied upon her appeal a good deal, but she will never be the most relatable actress.  Fiennes was just plain bad, as the weird father who doesn’t do the things he should.  Combine those performances with unnecessary Aboriginal legends and an unsatisfying climax, and Strangerland becomes a fine film, but nothing impressive.