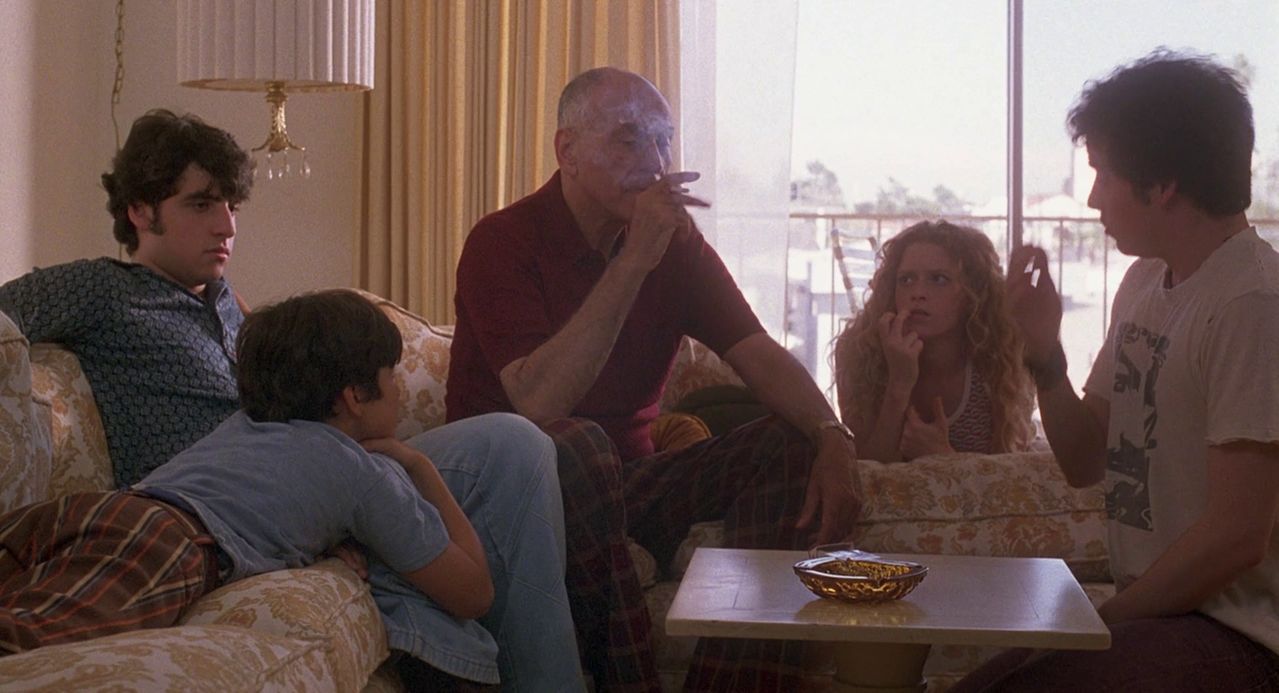 Like any Tamara Jenkins movie, and there have only been a few (The Savages, Private Life), Slums of Beverly Hills is a film you have to sink down into, almost sink down to its level, to possibly understand what dirty little secrets it’s trying to share, and what she is trying to say through the veil of dark comedy and utter despair.  On the surface, this is a story of family and of a young girl coming of age, but there’s so much more than that under the first layer, and it takes time for audiences to really focus on those details; if you blink the movie will be over before you’ve had time to really digest.  That’s a tricky challenge, because we only get so many opportunities to get this film, but if you do the emotional work you’ll be rewarded with something special; Slums of Beverly Hills holds a ton of humor and magic beneath its guise of every day despair.

The Abromowitz clan isn’t your typical family.  They’re Jewish, from the East Coast, living in Beverly Hills, dad is recently divorced, the three kids live with him on the road, as much as in any crappy apartment, he sells cars, they live out of the car as often as not, skipping rent and trying to make a buck, searching for the next big break like nomadic entrepreneurs.  Vivian in the middle child and the only girl, and she’s quickly approaching womanhood, with breasts and periods and self-discovery, as she struggles with her family’s poverty when she just wants to be normal.  Beautiful, unstable Cousin Rita movies in with the fam so that her rich father will pay for the Abromowitz apartment, but that only complicates matters, as Viv steers through the murky waters that are ‘growing up’, and attempts to find a balance between loving her relatives and hating how freaking embarrassing they are. This was Jenkins’ first film, and you can feel that; it’s perhaps unpolished, and definitely trying to say a lot in a very small amount of time.  Before you know it the movie is over, and you’re just starting to get a grip on what it is that’s trying to be said; it’s a shame really, because once you really start to think about what you’re seeing and feeling you realize that everything you’re experiencing within the story is deeply, deeply touching.  It just takes some time and some work, but that’s OK, audiences should be willing to lean in and listen, I only regret that it ends with us wanting more, but hey, that’s show biz.  Once you get a hold of the point, you start to fall in love, and it’s a quick trip to outright (if delayed) applause; makes sense that no one liked this movie until years later.

Jenkins was ahead of her time and perhaps ahead of herself, but she got a lot right anyway, and right away, enough to wow those looking closely.  A girl coming of age in the most personal of ways, a family in crisis yet still in love, a father who fears the inevitability of getting old; there’s a lot of wonderful, entertaining baggage here, with the comedy coming at all the right moments, relieving the despair of being poor, being lost, bring scared.  The cast is incredible, we have rarely seen its like: Lyonne, Arkin, Tomei, Kevin Corrigan, David Krumholtz, Carl Reiner, Mena Suvari, Rita Moreno.  And so many key moments will live on in film history; forks in legs, Viv dancing with a vibrator, Sky Masterson is mine!  Slums of Beverly Hills is a cult classic for sure, but not because it’s so bad it’s good like some others, but because it takes time to love it, like IPAs or Janice from Friends; once you’ve taken a big enough bite, you’re hooked forever.