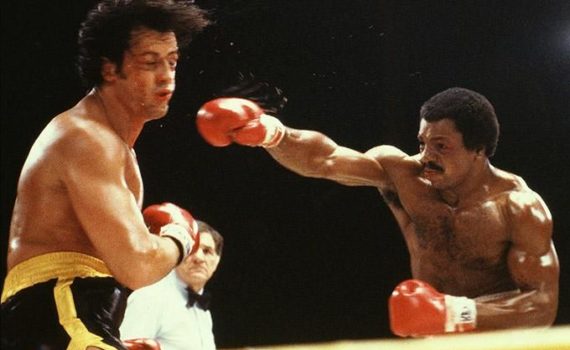 Rocky is the king; Rocky II is the heir to the throne that can’t possibly live up to his dad.  That metaphor works even better when you consider that Rocky has a kid in the sequel, which is one of the strangest parts of the film, so there you go.  But Rocky II does a lot of little, important things right along the way to a predictable conclusion as well, so it can’t be completely discounted, it just can’t be held up quite as high as its pater familias.  Basically we’re back for another round, and that can’t be all bad, since the first trip circling the block was so enjoyable.  Rocky is a legendary character, we (almost) just can’t get enough, so wade in and enjoy some more of the Italian Stallion, while he’s still in his prime.

Balboa has lost to Creed, but winning wasn’t really the point; he stood toe to toe with the champ and never gave up or stayed down, forcing the judges to make the call, and proving to the world that an underdog can pack a real punch.  Well, Apollo doesn’t like winning that way, so he’s pushing for a rematch, though Rocky says he’s retired.  Adrian doesn’t want him to fight again, and there’s a baby on the way, so it’s a no-go.  Mickey wants to train Rock anyway, the comeback put on hold when Adrian has complications with the baby.  But when everything turns out OK, Rocky turns his attention to Creed, and begins planning his strategy, a bout that will make him a legend.

Rocky II makes some key improvements over Rocky I, which is important, because a lot of the rest of it is no good.  I mean, this time Stallone wanted to direct, which obviously isn’t his strong suit.  Adrian’s coma, the dialogue, a runtime that couldn’t be completely filled; there were mistakes made, and there was no way this one was gonna live up to the first, especially ditching the use of that laid back 70s flick vibe that worked so well before.  But that’s not to say that Stallone didn’t know what audiences wanted.  More Mickey, more music, a longer, more detailed fight at the end; audiences were happy with the treats they were thrown.  It was almost enough to make us forgive the flaws (almost), and more than enough to make us enjoy Rocky and his success story one more time around.