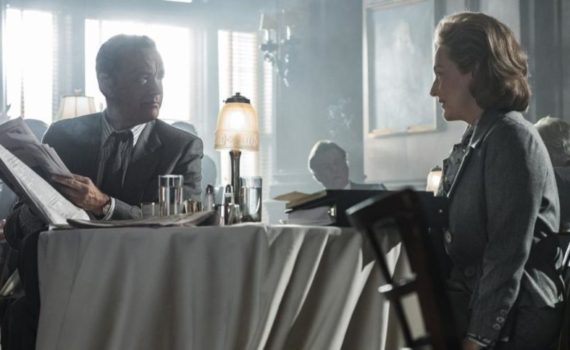 The Post is the hands-down favorite to win Best Picture, and it has been ever since it was called The Papers.  That shows you how preemptively we name the imagined nominees, and also how wrong we can be as film gurus.  Months before we saw any actual footage, we heard “Spielberg, Hanks, Streep” and let out a collective EEP! because we saw the greatness coming a mile away.  And there’s no denying their greatness, these are living legends, we should definitely be excited to see the confluence of their talent.  But, and it’s a big one, monikers don’t make movies, not even unbelievable loads of talent can do that, there has to be a spark to light the fire.  Which is the problem with this film; it’s a damp rag that never had a chance to burst into flame, despite the high-octane it presented.

The Vietnam War meanders on and the U.S. continues to despise its own involvement, the government attempting to convince the public that it’s a necessary struggle while the majority of citizens hate what’s happening over seas.  According to a leaked document, multiple presidencies have been lying to voters about our chances in the War, not wanting for the struggle to be lost on their watch, keeping the tragedy from view by making all information Top Secret.  When the New York Times publishes the coverup, they are halted by the White House, held up in court with only a portion of the truth known.  So Kat Graham, owner on the Washington Post, has a tough decision to make; does she respect the wishes of the government or does she publish, knowing that it could spell the end of her paper?

First, Spielberg, Hanks, Streep, the pieces you expect to be good are good, no surprises there.  Even the side actors are strong, and you won’t be able to point fingers at glaring flaws that keep The Post from being the Best Picture winner it is expected to be.  The topic is relevant, it’s interesting, you can feel the glance to the current presidency, and this is history we should be aware of, with talent to deliver it to us in a way we should appreciate.  However, and this is where it goes downhill, this film is nothing more than fine.  It is a smart movie with absolutely nothing else to offer, a formula we’ve seen before brought to us by the appropriate people, but not mixed with anything sweet enough to draw our love out the way that we expected.  The Post will not win an Academy Award for Best Picture; I wouldn’t be surprised if it’s still nominated, it’s by no means a bomb, but it simply isn’t as amazing as you want it to be.