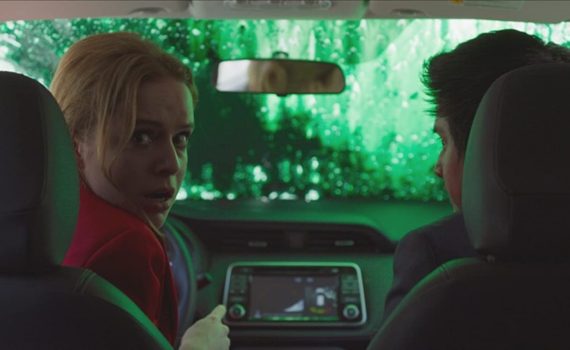 It might be flippant to say, but New Order is just Roma meets The Purge, a film that’s trying to teach us a lesson on Mexican class warfare while also trying to appeal to our sense of entertainment with a chaotic dystopian feel.  But I don’t think the result was exactly what the filmmakers were intending; mixing relevant with irreverent, morals with nihilism, until the entire theme becomes as messy as the paint splatters that feature only for a hot minute, then are discarded like a bad idea.  Director Michel Franco didn’t have a strong hold on this film, it got away from him, and what it ultimately turned into I doubt was his intention.

At a wedding party, Marian celebrates her new life in her parents’ home, surrounded by opulence and loved ones, without a care in the world.  Meanwhile, the city is in growing upheaval, with a violent group of troublemakers preying upon the wealthy, the powerful, the system.  Their symbol is lime green, their anger is real, but hey, life goes on, weddings need attended, and the police will take care of the city’s problem children.  But the threat soon grows and is now at the door, as the party turns deadly and the city burns.  Marian is taken hostage and negotiations begin, but the real war is between the normal and the new, the old world and the potential for something different, but perhaps no less deadly.

If it was Franco’s intention to make this exact movie, then I guess he just has bad taste and/or a bad eye.  But I think it more likely that he simply had a clumsy hand with what was an interesting story to build upon, it just needed a little more care lest it crumble into anarchy.  That was the problem; it all came crashing down so quick, and it wasn’t the set up that was the issue, it was the continuation of the plot, like no one had any idea where/when/why to end up.  I thought there was some good momentum growing, but by the end I really couldn’t tell you what it was that exactly happened.  Maybe that was the point?  Maybe there was a message about our enemies in there, that those in charge want to set us against ourselves, rich poor, black white, east west, whatever, and that their factions are all part of the same death machine that only wants to eat us up, and it won’t be clear to us what’s happening at all.  I don’t know, and I don’t really care, which is not the sentiment that I should have after watching something like New Order, it should have forced me to be invested in the answers to the questions, which simply did not happen.