Movie Review – News of the World 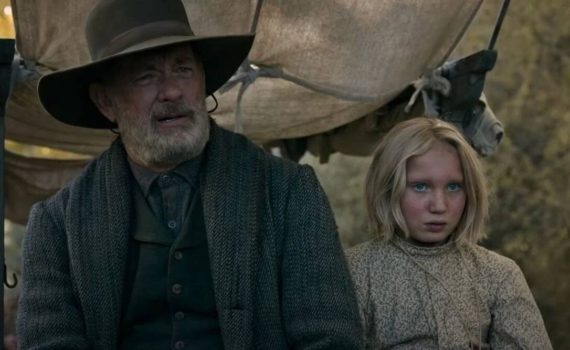 Movie Review – News of the World

There’s a reason you haven’t heard of this Tom Hanks Western, and it’s not COVID.  It’s because it’s a sub-par Oscar contender, it’s discount-grocery Hanks, it’s a nice idea executed with the precision of a helicopter flying low, tilting down, and chopping up zombies.  Basically, it’s a mess, a blunt bludgeon when a defter hand could/should have crafted something much finer, especially with Tom as a leading man and a story that’s hard not to fall deep into.  News of the World is only OK, with a few nice parts and a few glaring mistakes, a film that would have been much better had someone more talented been given the opportunity to bring what could have been excellence to life.

Captain Jefferson Kyle Kidd, formerly of the Texas Infantry fighting for the South in the Civil War, was also once a printer of the news, but that business failed along with the Secession.  Now, Captain Kidd travels from Texas town to Texas town reading the latest newspapers, sharing the current, revolving history of the modern world with local folk who can’t read or simply don’t have the time to.  He helps educate those whose lives are too hard for such pursuits, and he’s relatively happy with his role.  A chance encounter on the road between towns finds Kidd responsible for a little girl who needs returned to her home; her family were German immigrants, she was captured by the Kiowa, and is now set to be taken to kinfolk.  But the journey will be hard, the country is rough, and Kidd, though he knows a lot about national politics, has a lot to learn about making friends.

Tom Hanks is an American treasure and I’ll hear no argument on that fact.  That he would shine in this role was a given, and he delivers up to all expectations; Hanks in Western gear is just a neater form of the Hanks we already thought was neat.  And the girl, Helena Zengel, plays her part well too, the pair of them forcing the feels, drawing audiences in, making the story work, at least for the most part.  But it was the story itself that was the problem, so they were always fighting against the awkward script and the poor production of the film, and they were often on the losing end.  The plot is meandering, the action sequences are terribly directed/shot/constructed/CGIed, and the Odyssey-style journey with adventures in between chapters becomes laughably bad.  And, weirdly, there never seems to be a real point, beyond the obvious morals that the film is trying to shovel, like, “yeah I got it, but you’re telling me there’s nothing more?”  News of the World is bumpy at best, and it’s not like I hated it, it’s more that I was angry that the director wasn’t able to maneuver his way around what I’m sure was a tricky narrative, but also one that the truly gifted could have handled, which, in theory, would have resulted in a movie that we truly liked.