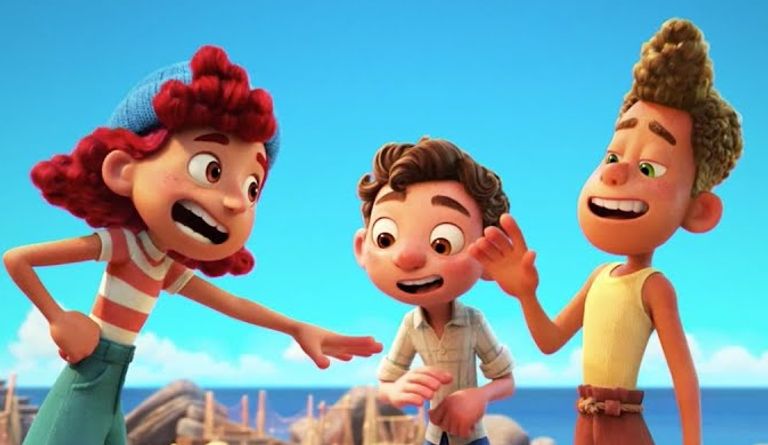 Luca is enchanting, delightful, and fun; it may not be Inside Out or Coco, but, then again, what is?  Just because it isn’t the best thing Pixar has ever made does not mean it’s the worst, far from it, and our standards must be getting ridiculously high if this is what we call “bottom tier”.  I agree that many recent films, stifled by the pandemic, have come out flat and/or unpolished, but I don’t think we should quickly kick Luca into that group, simply because it isn’t WALL-E.  What it does have to offer is enough energy to sufficiently stimulate most audiences, and also enough heart to carry three animated films to the finish line, let alone one.

Luca is a sea monster who lives off the coast of an Italian village and who longs to see what’s topside.  His family strictly forbids it, but he’s curious as to what’s up there; human world, human stuff, humans themselves.  “Helped” by a fellow sea creature named Alberto, Luca reaches the surface, where his kind instantly take on human form, at least until they are covered by water again.  He discovers that all his dreams were realities, that Earth has so much beauty to offer.  Luca & Alberto soon become fast friends, but jealousy will rear its ugly head when a girl named Giulia makes the duo a trio.  True friendship isn’t easy to keep alive, it takes sacrifice & care, and sometimes cheering on an opportunity that might take your friend out of your life.

Call me a softy, but Luca touched my heart, with its story of friendship, sacrifice, and doing what’s right.  It’s a great & simple tale, easy to watch, easy to love, and not demanding of its audiences; I guess there are times when I would critique a film for being too basic and not forcing us to think, but I honestly didn’t feel that same vibe here, I took Luca as a chance to simply feel.  The backdrop, the music, the mood, the ease; it was so lovely to watch, such an enveloping presence of emotion and passion.  I could have done without Luca’s parents, they were pretty unnecessary, and even perhaps the “villain”, but I loved his friends and their partly-complicated relationship, the trio was strong enough that I was invested in how they would solve their problems and they became all I really cared about.  Ultimately, it’s a story about being different, but how that’s OK, because those who accept you for who you are will become those who matter, and those who don’t can go kiss a fish.