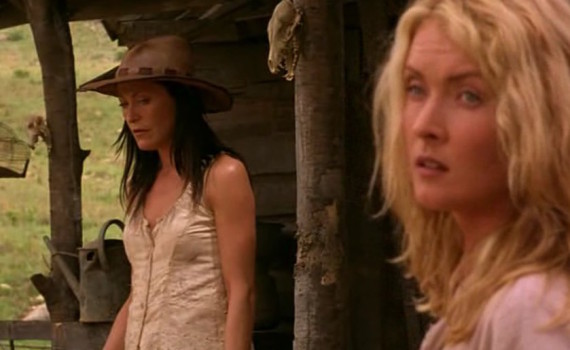 What I expected from Hooded Angels was something akin to True Women.  If you haven’t seen it, that film was a 1997 made-for-TV movie about the strong women who helped shape out country in the days of the Wild West, Texas Revolution, and Civil War.  It starred Dana Delany, Annabeth Gish, and Angelina Jolie, in one of the latter’s earliest major roles.  It’s been years since I’ve seen it, but I remember the epic feel, the different viewpoint, and the great Western vibe.  So I wanted something like that again, perhaps slightly more adult given that it wasn’t made for television, but hopefully just as solid.  Well, what I got was something a bit more like Barbarian Queen without the boobs & sword fights.  And really, without the boobs & sword fights, what’s the point?

During the last days of the Civil War, the innocent were in just as much danger as the soldiers, as rogue forces roamed the west and took what they wanted.  In a small town, an attack rages, villagers are killed, and the men responsible escape.  Well, most of them.  The few who stayed behind are gunned down by the women who watched their families die, shot down by men who barely even noticed they were humans.  And so a new gang of criminals in born, made up of the widowed & childless who won’t see anything taken from them ever again.  Their justice left behind them long ago, they are now no more than thieves, organized & undercover, hooded beauties who have never been caught because no one knows what lies under the masks.

The story is one which, in order to enjoy at all, you have to stop trying to figure out how anyone got from point A to point B, whether in storyline or timeline.  It just doesn’t make total sense, and you realize early on that you’re not supposed to care.  So you prime yourself for a spoof perhaps, at least a b-movie, something that will be gratuitous & amusing.  Well, Hooded Angels is neither.  The gunfights are terrible, there’s very little sex, and what you’re left with is a watered down version of a late-night film that doesn’t deliver anything you ask from it.  I wonder what the director was shooting for, because this film fails to be either a quality Western or an over-the-top farce.  The one amusing factor was the wide range of accents, some completely hillbilly and some obviously hiding foreign origins.  Oh, and Gary Busey, who popped in for 2 minutes for no apparent reason.  It’s an odd film, one that doesn’t really warrant a watch.