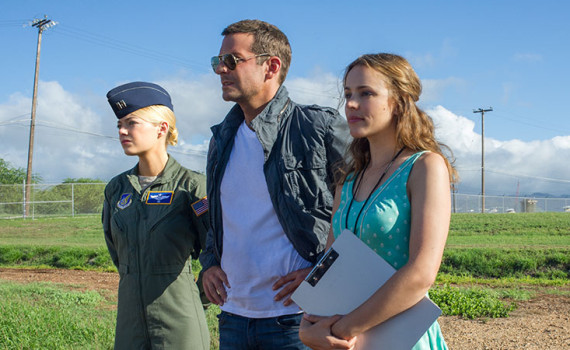 If I was a bit worried when I saw the trailer for Aloha, I became even more so when reviews started coming in.  From all accounts, it was a bad, bad movie.  It was a mess, a muddle, a confused trampling of a badly-written story that never really stood a chance.  Whoa.  And even though I had my own doubts back in February, I thought it couldn’t possibly be that awful.  After all, Cameron Crowe is talented, that’s a fact, and he’s written some absolute gems in the past.  His films have heart, and with these actors on board, there had to be a floor as to how far down a few mistakes could take the project.  So I went into the theatre expecting perhaps not the best Crowe film I’d seen, but definitely not a movie worth a story I had heard a few days earlier, that a man stood up in the middle of a viewing and yelled to every stranger in the audience, “What is going on?!?!”  Well, I didn’t do that, but I did hold my head in my hands a few times, look around the room, and wonder if I was the only one who felt like the cast & crew must have lost their collective mind.

After failed missions overseas, former solider & current private contractor Brian Gilcrest has one more chance to prove that he’s the best of the best.  In Hawaii, his old stomping grounds, Brian will reunite with his former boss, billionaire Carson Welch, helping him launch his own personal satellite.  It’s not an easy task, since the American Army has control over so much, and the native Hawaiians need to write off on the project, but Brian knows the buttons to push, the high-ups to bribe, and will get the job done at any cost.  That includes alienating the beautiful liaison who has been ordered to help him and upsetting the balance of the family of the girlfriend he left 13 years ago.  Oh and there’s a powerful Hawaiian prophecy that Gilcrest may be a part of, allowing him to decide the fate of the land, the people, and his own future.  Merry Christmas, mahalo, and aloha.

I can understand how that confused man felt in the theatre, and I wonder if Cameron Crowe is the only person who gets this movie.  It was as if every line was hand-selected to be the opposite of the emotion that the actor was trying to convey.  As if, when writing the screenplay, Crowe decided that every character would say & do the one thing that didn’t make any sense at all when put in the context of the story.  And the story would be so convoluted that every piece, sequence, action, and thought would take place in no particular order or with any baring on the moment in which it occurred.  I hope I’m being clear enough; Aloha is a breed apart and makes no sense, to quote Hawkeye.  It’s a movie that has too many plot lines, too many morals, too much talking, too many ridiculous shots, and not enough of what makes audiences love the cinema, namely foundation, entertainment, and believability.  It’s a failure on almost every level: directing, writing, acting, and execution.

When he first came out I thought Bradley Cooper was a douchebag.  The Place Beyond the Pines, Silver Linings Playbook, American Hustle; these movies changed my mind and showed me a terrific up-and-coming actor.  But wow is he on a downward spiral.  First Serena and now this?  Cooper comes off as unlikeable, fake, and miles away in both films, only in this one he’s the dreamy star that you’re supposed to root for.  No dice, as Brian “Sexy Pants” Gilcrest is about as lovable as the nauseating feeling that the film gives you about 10 minutes in, a feeling that tells you that you’re in for one crappy ride.  Emma Stone was OK, Rachel McAdams was wooden, Danny McBride was a distraction, John Krasinski (sorry Jim) was just plain awful, and Murray & Baldwin were just thrown in for clout.  But no amount of acting prowess could make up for the terrible Hawaiian Nation storyline, the confusing emotional roller coasters that refused to end, and the complete lack of investment I felt from the very beginning.  The final scene was the best part of the movie, and the only part that felt real, but by then it was too late.  Aloha isn’t good; it’s that simple.