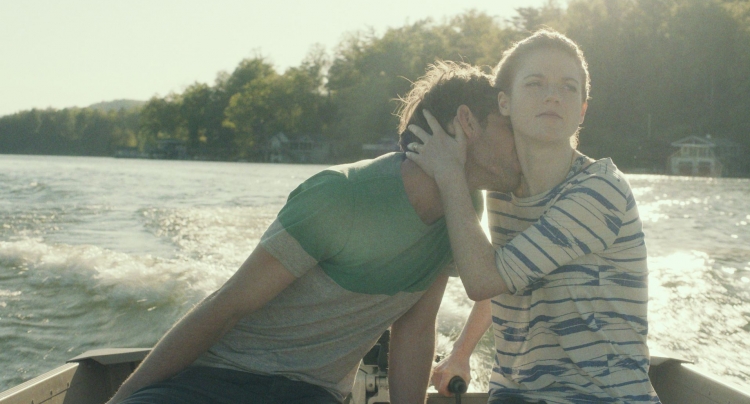 Who can resist a good horror movie about a honeymooning couple?  The secluded woods, the passionate sex, the unknown past; sounds like a recipe for movie success.  All that’s needed are two actors who can carry the load, since they’re sure to be alone & in focus quite a bit.  First up, Harry Treadaway, star of City of Ember, which is definitely a better movie than book.  He’s British, he’s talented, no reason he can’t play a confused husband.  Next, Rose Leslie of Downton Abbey and Game of Thrones fame.  She plays Ygritte in GOT, an interesting character, though Leslie is a bit more waifish than I imagined Ygritte to be.  Anyway, these are two quality actors who should be able to pull off a married couple in a horror movie.  And I liked this film, I did, I thought it was good.  But good isn’t wonderful, and there’s a reason why the film failed a bit, a missing necessity I forgot to mention that kept it from greatness, and that would be ‘chemistry’.

Paul & Bea are newly married; young, hip, in love, and on their way to their honeymoon.  The couple are headed to the woods, to Bea’s family’s cabin, leaving the city and its pressures behind for a romantic getaway.  The cabin is lovely, the town distant, the forest beautiful, the lake cold, and nights steamy; all is going smoothly.  That is, until Paul leaves the cabin early to go fishing and finds Bea standing outside.  Naked.  Freezing.  Torn nightgown nearby.  No memory of how she got there.  Denying there is any sort of problem.  Professing that she must be a sleep-walker.  Well, there goes the idyllic honeymoon.  Bea’s behavior starts to become erratic, she starts to forget what things are called (“It’s in the bag, I mean the clothes bag, I mean the suitcase!”), and Paul suspects that she’s lying to him with every breath.  Does it have something to do with the past boyfriend the pair met in town earlier?  Or the strange lights that shine in the windows at night?  Or the bite marks on Bea’s legs?  Something has gone terribly wrong, and Paul’s love her Bea might not be enough to save her.

I got a little creeped out just writing that & remembering.  It’s that kind of story, one that has you saying “what the what?!” while shying away from the screen.  It starts out so nice and goes downhill so quickly, with very little detail beyond clues and musings.  You feel as lost as Paul feels, as helpless as he is, and you just ride the story to its conclusion.  Treadaway does a great job with his character, with making you believe that he loves his wife, that he’s scared beyond imagining.  And Leslie does fine with Bea as well, making her weird & vulnerable, oddly cryptic.  It’s the chemistry that failed to wow me, to make me feel the passion, and to force me to root for the survival of the couple.  I never really felt like they were together, instead they played two separate parts of the same plot.  And that plot ended up disappointing, as too many twists do.  It’s our fault as audiences I guess; it would take a miracle to make us happy with the ending of a horror/thriller.  But be that as it may, I didn’t love the finale, didn’t like the path the story ultimately took, and never felt connected to the couple the way I should have.  I won’t call the film terrible; I enjoyed the set up, most of the acting, and the general idea.  But I fell short of singing its praises by quite some distance, leaving Honeymoon as a middling attempt.