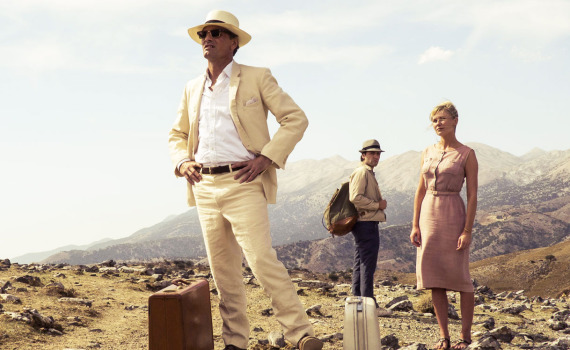 I know I’m not alone (although sometimes it feels like it) in saying that Inside Llewyn Davis was one of if not the best film of 2013.  It had everything you could ask for; great music, an excellent story, witty comedy, an original feel, and some phenomenal acting.  Oscar Isaac was a big part of that, obviously, as he played Llewyn and set the tone of the movie.  He’s a young up-and-comer whose talent shouldn’t be ignored, as he can be so many things within a short span of time and/or role.  Here he plays a much different role than that of Llewyn Davis, but he delivers the same depth of character, the same complexity of emotion, the intriguing lack of background.  The Two Faces of January is a thriller led by this excellent, dark, captivating actor, a story held up on capable shoulders.

In Greece in the 1960s, a wealthy couple tour the cities & sites as you continue their roaming of Europe.  They are Chester & Colette MacFarland, at least those are the names they go by.  Chester is much older than Colette, a dealer in investments, and a man who may have made a lot of rich people back home  in America very angry.  The couple meet Rydal, an American tour guide, a young man who speaks many languages and knows his way around.  So when Chester gets in a little trouble and needs to disappear, Rydal is there to help, often casting a longing eye toward Colette and Chester’s suitcase full of cash.  Now the duo is a trio, with the police hot on their heels, with questions about each others’ pasts, and with no way to know how this odd relationship will end.

From the description and the genre, I expected a bit more typical thriller; a thousand double-crosses, twists around every corner, never knowing who was telling the truth until the very end.  What we end up with is something much different, a thriller based on tension and trouble, less reliant on surprise.  With that kind of story, you need great acting, and thankfully each of the three were solid in their respective roles.  Dunst was perhaps the best I’ve see her; restrained and simple, beautiful but not cheesy.  Mortensen was the same, strong in a complex role and never trying to steal the scene with over-acting.  Isaac ended up as the star of the film, the character that you root for, the pivotal piece in the driving action.  He kept the film grounded and smoldering, making it interesting & deep rather than exciting & shallow.  The Two Faces of January is less thrilling than you might anticipate, but in a good way, ultimately becoming a good movie on its own without relying on the tricks of the trade.