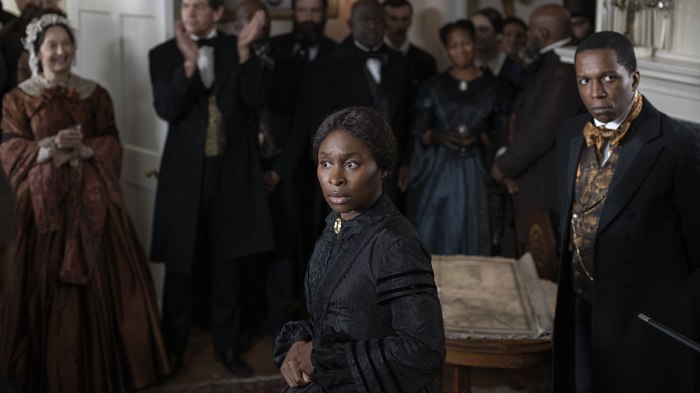 Cynthia Erivo was nominated for Best Actress for this role, and she also wrote/performed an original song for the film that was nominated as well, so obviously those two parts of the picture are worth noticing, recognizing, and applauding.  As is the base plot, which is something I’m surprised we haven’t seen already, since the true story is larger than life; escapes, rescues, heroes with flintlocks, hundreds of lives saved, it’s an unbelievable piece of history that’s totally true.  Harriet isn’t completely though, there is a lot unnecessarily created to flesh out the story, which has some people riled up, but which I didn’t even mind.  I was too busy wondering whether I was watching an actual feature production or a reenactment on the History Channel; very few times have I seen quality this low, and I hope I never do again.

The life and times of Harriet Tubman are awesome with no additives, but Hollywood rounded the edges with some imagination, so here we go with a version that won’t be too hard to best in future years.  Harriet, called Minty as a slave before she chose a name for herself, was married to a free black man in Maryland, but ran away from her owners when she learned that she was to be sold away from her family.  Visions from God told her where to go and helped her see the future, so she escaped with her freedom to Philadelphia, but her passion didn’t only carry her that far, it drove her to help others in the only way she knew how; getting them the hell out of bondage.  So Harriet returned over and over again into enemy territory to free her people, with death lurking around every corner and evil out to capture her, because she knew that her God was watching out for her, and that her family needed her help.

I had so many problems with this movie it’s going to be hard to categorize them; let me start with the positives.  The original song is strong, though I don’t remember it in the film, it might have just been in the credits, which is a shame.  Erivo was also solid, though not the world’s best actress; at least she elicited our support and she controlled the moment very well, which is good since she was, by far, the central figure.  But that’s where the positives end; the rest was as good as something you would see on A&E about the Underground Railroad on a Sunday afternoon when there’s nothing else to watch.  More accurately maybe, Harriet was like a long Wishbone episode, complete with a moral, a historical figure, awful acting, and shot with a style that screams “discount television”.  I can’t believe the score, the camerawork, the writing, and the action were all this bad, like a PBS special instead of a real film.  Thank Leslie Odom and Janelle Monae heartily for that; they could not possibly have been worse.  And then there were the visions, which were straight up childish, and seemed to be telling us that Tubman was a religious figure rather that a brave, honorable, human one; I can’t begin to put into words how angry that made me.  No, she didn’t see the future, she was “just” a woman who was a better person than any of us will ever be; why is that not enough?  I wish a very talented director would immediately remake this movie and bring it up to par with other, powerful Civil War era films so we could wash this from our minds and forget it was ever made this poorly.