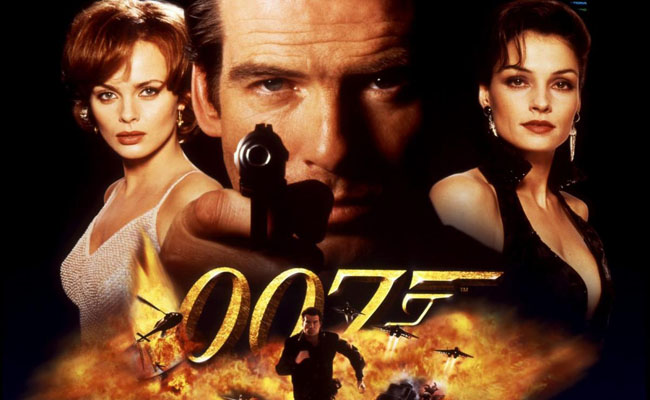 Getting a new James Bond in the 90s was a big deal, especially after the Timothy Dalton fiasco of the late 80s; we were in need of something new, something modern, something less cheesy and more forceful.  Enter Pierce Brosnan, the Irish Savior, and enter GoldenEye, the film that would spawn a new era, a reinvigorated franchise, and usher in a new generation of audiences ready to follow 007 to the ends of the earth.  The problem is, when you look back what is now 25 years later, you spot the mistakes more readily, and you also aren’t a teenager any more, you’re a critical adult, so the gold you remembered just looks gilded, and flaking at that.

James Bond as 007 and Alec Trevelyan as 006 team up to take down some Rooskies, and they succeed, though Alec dies.  Years later, that same Russian leader reappears with a trusty, sexy sidekick to steal a prototype helicopter, reroute a strange satellite, and attempt to topple some governments, or so it seems.  But there’s a man from Bond’s past who is behind the operation, and he wants more than violence.  James teams up with a scientist named Natalya to stop the satellite from completing its dirty mission, but he’ll also have to face his demons and use up some of his nine lives to win the day.  Colorful characters and death await around every corner; no man but 007 could face all and still come out as cool as the other side of the pillow.

GoldenEye is a bizarre bumble that only worked when it did because we wanted it to, and only stands up now when compared to the others of its era, which are unfortunately much more terrible.  So, in a way, GoldenEye is at once an awful movie and a great resurgence, a film that worked when it came out but only shines in comparison to its fellow, following franchisees.  The opening sequence is abysmal; Bond ready with the one-liners, guns a-blazing, with a Tina Turner followup that may be the worst song ever made, Bond theme or not.  What comes next is a mess of Russian bad guys and one interesting femme fatale, who at least kills people in an unusual way.  The rest of the movie is so bloated with action that it becomes dull, in a ho-hum-we’ve-seen-this-before kind of way.  I remember liking it, it did restart the series, it has a place, but that place might be in history, not in a re-watch.  At least the cast is fun: Brosnan, Bean, Famke Janssen, Judi Dench, Robbie Coltrane, Alan Cumming, Desmond Llewelyn, Samantha Bond, Simon Kunz, Minnie Driver.  And I even played the video game, it was a pivotal first-person shooter, there is much impact to be laid at the feet of the film, it just isn’t very good when you really get a good look at it, so maybe don’t.