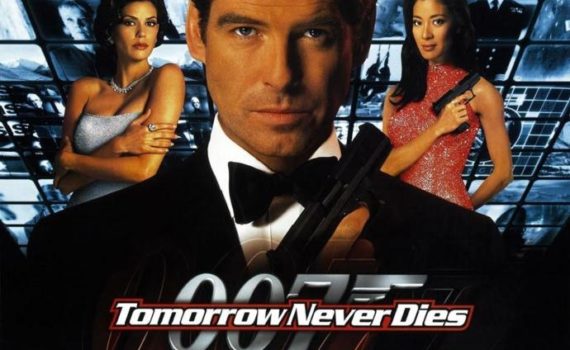 Two years after GoldenEye we got another Brosnan Bond, and if you think it couldn’t get worse you were wrong; Tomorrow Never Dies is perhaps the crappiest action flick ever honestly assembled.  Well, we still have the last two Brosnan films to consider, but hate is a gut reaction to this movie that comes as naturally as pulling back from a surprise spider; if I could have ran away from this film while still watching it I would have.  It’s not that it’s bad, it’s that it’s so bad that everyone involved in it should be made to wear a sandwich board every time they have an interview, meeting, or audition that reads “Yes I helped make Tomorrow Never Dies and I’m sorry” so that they’ll never live down the shame.  Bond at its worst?  That’s a big catalog to sort through, with a lot of shocking duds along the way, so maybe not, but also, uh huh, yeah maybe.

Bond is back, and this time 007 has to save the planet from a madman who means to pit the world’s governments against each other, even if it means World War III.  First, Bond reunites with a lost love named Paris who is now the wife of  insane media mogul Elliott Carver, who seems to be behind a lot of nefarious activity, including fabricating news stories and generally pulling the puppet strings of every nation’s leader.  He’s got big, evil plans, but Bond will stop him in time, you can be sure of it.  He’ll need help though, which comes in the unlikely form of his Chinese counterpart, the multi-talented Wai Lin, who at first is competition but will soon be someone James needs to survive.  Can they stop all the madness in time, or will the world go up in one big mushroom cloud, with Carver’s cameras at the ready to catch every gory detail?

Oh dear god it’s wrong, just wrong on so many levels.  First, I hate to say it, but Pryce should go down in infamy as playing once of the worst film villains of all time, and looking so stupid while doing it.  It’s just so dumb and forced and awkward, the billionaire media guy who wants to write the world’s obituary.  Pryce does it so badly, all the henchmen around his are so terrible, it’s a feat just trying to take Bond’s mission against them seriously.  And then there’s Brosnan’s action, which goes beyond spoof, becoming something so silly it’s insulting.  Yeoh actually saved the day a few times, but still couldn’t ever really fit, with the rest of the cast an odd collaboration: Teri Hatcher for five seconds, Ricky Jay who’s awful, Vincent Schiavelli, Dench, Llewelyn, Bond, plus Julian Fellowes & Hugh Bonneville & Brendan Coyle for you Downton fans, even Michael Byrne and Gerard Butler.  No one really works though, there’s no heat in the movie, no rhythm, no connection, it’s just a bizarre series of idiocies until we can finally breathe a sigh of relief as it ends.  I thought GoldenEye was silly, but it seems like cinema royalty after Brosnan Bond #2; I dread going forward to watch more.