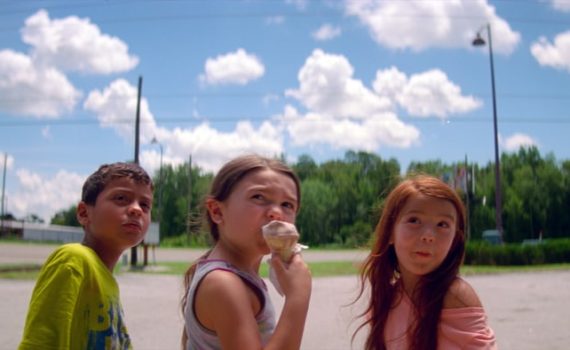 The Florida Project is one of 2017’s most talked-about films, an independent feature that has Hollywood chops, and legitimate Oscar hopes.  Sean Baker’s Tangerine was an underground hit two years ago, and he follows that up with another, a movie that feels like a documentary but with the prowess of a high-end drama.  How he melts his styles is beyond me, and beyond most other directors as well, since no one seems to be doing what he’s doing.  Well, I take that back; Andrea Arnold did it with American Honey, and I think I prefer that film over this one, if just barely, so it’s worth mentioning.  But Florida Project is undeniably unique in many ways, it’s on everyone’s tongue this year, and you ought to see it, if only for the unusual experience it provides.

In the third-rate hotels of Orlando, near Disney, the lives of their occupants roll on regardless of progress, princesses, or day passes.  There is rent to be paid and food to be bought, although where the money comes from is always a question.  Moonee’s mom hustles, making a buck however she can.  Stripping, selling wholesale perfume, prostitution; what matters most is where the next meal is coming from.  In the summer months and while not in school, Moonee spends time with her mom watching TV and walking in vacant lots, palling around with friends who also live in the hotel whenever her mom is busy.  This vivacious little girl finds joy where she can, since her world isn’t filled with easy choices and nice people, since her home is a room number that can change on any given day.

I did enjoy American Honey more, if we’re judging within a style.  It was more adult, more chaotic, had more actual actors, and delivered more of a specific, special mood.  It was long though, and did leap about a good bit, so that’s something that can be put in Florida Project‘s corner; it was fairly short and was ultra-focused on life in this one purple-painted hotel.  It’s almost a documentary of an alternative lifestyle, and a reminder that growing up is growing up, no matter where you do it.  Credit to Sean Baker for executing a very fascinating vision, kudos to the amateur actors in this film who gave it a realistic vibe, and shout out to Willem Dafoe, who was pretty great.  I can’t see this movie winning many Academy Awards, I don’t think it excelled in exactly that way or that much, but I do think it’s well worth your time, something you don’t see every day but is worth your notice.