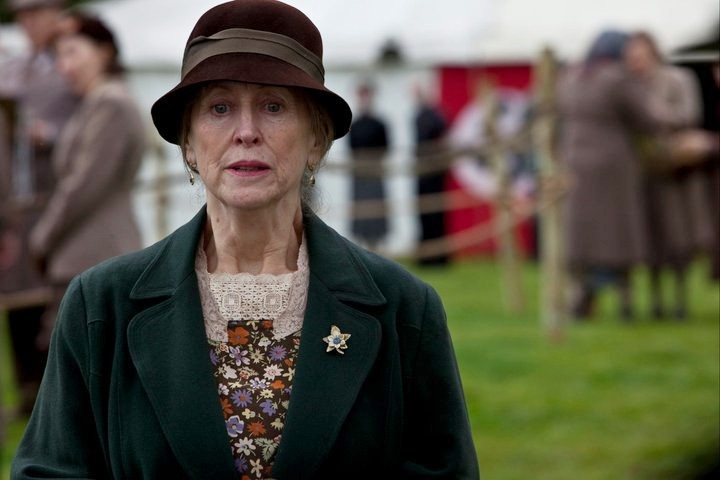 I can’t use the term “alternate history” without thinking of “alternative facts”, so there goes that innocence, thanks Trump.  It’s ironic that both terms mean fiction when one of them is supposed to mean truth, but to avoid getting political, I’ll attempt to slide past what my mind wants me to focus on and stick to the film at hand.  Alternate history is an entertaining genre, re-imagining the past and reshaping it into what might have been.  It’s almost a form of science fiction, minus the science, or at least has a multi-dimensional feel that I enjoy, an other-worlds-than-these atmosphere that I like woven into a historic drama, which I also like.  So the genre is a win-win; too bad this take on it is most definitely not. As WWII draws to a close, Germany is poised for victory.  D-Day has failed, the Allies have not retaken Europe, and Nazi forces are beginning to take over the civilized world.  They begin their occupation of Britain, an inexorable crawl that meets no battle, as a defeated England draws in on itself in an admission of defeat.  Entering the nation from the south and from the east, the Germans parade across the countryside in relative peace and order, exemplifying the unstoppable end.  The British government issues that no civilian should help or aid the occupying forces, that they should stay in their homes, that life goes on, but for those on the new “front”, choices are not so simple.

In one small village, the women of the farms wake up one morning to discover that all their men have disappeared.  The assumption is that they have joined in the resistance in the hills, refusing to sit and watch enemy troops take control of their country.  But no man said a word to his wife, so that no clue could be given to the Nazis, and now the women must live under German control alone and unsure.  As winter approaches, a small German military band stationed in the village begins to help with the farm work, the saving of animals and crops, the protection of the local people.  They seem to want to sit out the rest of the war, to forget that they are enemy soldiers, to keep a low profile from the watchful eyes of the Gestapo.  But can the villagers accept these men, can they forget their own kin living somewhere in the forests, and can life really go on after so much war? The idea behind this film is fairly brilliant.  We’ve seen occupation stories centered around the Holocaust, even around Nazis in France, but I’ve never come across an alternate history based on the possibility of occupied Britain.  I’m sure there are enough true stories from this time period to fill a million films, but it was nice to see something unique in its content and its fiction, creating a new way to look at WWII for those who just can’t get enough.  Giving a face to those who suffered from this war in this way, even a fictionalized face, was intriguing, as was the attention given to the German soldiers as well, painting them as people rather than uniforms.  Shooting a gun is easy, creating relationships with sworn enemies is something else entirely, a concept this film plays with in a very imaginative way.

And that’s where the positives end, other than the first 10 minutes of the film.  As we enter the village and discover that the men have gone, we meet the women who are left, a few underground resistance fighters, and the Nazi troops stationed here.  These characters are fascinating at first in their complexity, but quickly lose any magic as the film trudges on.  It quickly becomes one of the dullest war movies you will ever see, and I don’t mean because it lacks big explosions, but because it also lacks any real reason to watch.  There’s a pseudo-love story, a cameo by Michael Sheen, some walks in the woods, and all the while audiences have got to be wishing that someone would put this story out of its misery.  It’s both boring and banal, a failure to create a stirring drama based on the curious what-ifs of history.  Don’t be fooled by the set up; the rest of the show offers us nothing.

Video – With an aspect ratio of 2.40:1 Widescreen and shot using Panavision cameras and lenses, the video quality of this film is nowhere near the strength that it ought to be, failing to visually capture the locale or the time period in a way that pleases audiences or lives up to the potential of the technology at hand.

Audio – In the setup menu, there is a choice between Stereo and 5.1 Surround Sound, with an option of turning on English subtitles.  That’s it as far as the sound is concerned, and the music is even less exciting, adding to the film in no way whatsoever. Rent It.  With a good concept but very little else, this is a movie better skipped by most, but something that might just interest enough aficionados for a recommendation that you don’t write it off completely.  The alternate history aspect is very cool, as is the beginning set up, but the fact that the rest of the action seems to be a race to rock bottom destroys any credibility the movie earns early on.  The technical aspects are all dubs, from the audio/visual to the extras.  Only WWII buffs or slow romance fiends would find a spark here, and I imagine even the more critical among them would recognize that the meat of the film is not of a very high quality.