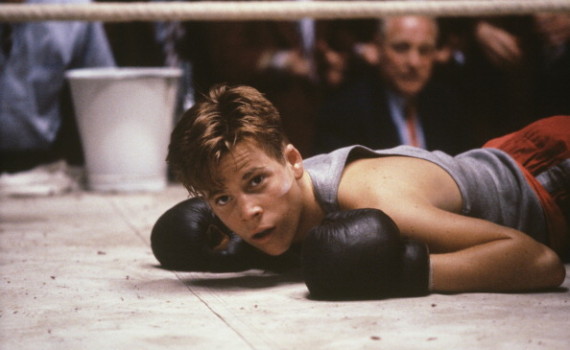 I don’t want to speak for everyone, but I had never heard of this movie before deciding to watch & review it.  On IMDb, The Power Of One has around 7,000 ratings, which pales in comparison to another Morgan Freeman film, The Dark Knight, which has about 1,600,000.  So while I’m sure there is a select group who know & appreciate this movie, I think I’m safe in saying that your average audience member doesn’t know that it exists.  But the question is why not, given the solid cast, crew, and subject matter.  Stephen Dorff as a youngster, Morgan Freeman as a prisoner a couple years before Shawshank, Daniel Craig in his very first role, and even Armin Mueller-Stahl, one of those veterans you’ve seen a hundred times but could never tag a name to.  Pieces aren’t everything, but these pieces come together, with even more talent in the basement, making this a movie that has no place living under the radar.

South Africa has never been accused of being simple, its people & politics charting the course when it comes to complicated interplay and ethnic struggle.  The original Zulu people, British colonial control, Dutch migration; these cultures clashed for centuries, leading to many wars, the abolition of imperial rule, the Afrikaner government, apartheid, and eventually the rise of Nelson Mandela.  In the midst of all this struggle, individual lives were carried out, children were born, futures were decided, and small actions had large consequences when set against a backdrop of such a chaotic nation.  This is the story of P.K., the Rainmaker, a boy who understood that even the littlest change can make a big difference.

P.K. was of British decent, but always considered himself a South African.  His father dead, his mother gone, P.K. had to make it on his own courage and intelligence.  The native people saw only his white skin, the Afrikaners heard only his English accent, but he saw in himself a strong spirit that could stand up for what was right, no matter the cost.  During the War, P.K. stood with prisoners, united tribes, and learned what it meant to be a man.  In school, he boxed, studied, met a beautiful girl, and saw that South Africa could become a nation of multiple nationalities all living together in peace.  He set to help segregated natives learn English as a way toward equality, making countless enemies along the way, but proving himself a hero with every action. These actors in this spot is reason enough to see this film.  Dorff just starting out, Freeman in an emotional role, Craig debuting; what else do you need?  But The Power of One has even more to offer, which is why I’m shocked that this isn’t a more widely known movie.  Just look at the director and his filmography: Rocky, Karate Kid, Lean on Me.  Are you kidding?  This guy directed all those movies, with this one as a cherry on top?  It’s baffling how this one has flown under the radar for so long.  And, again, I’m sure some of you have seen it, especially if you’re taking time to read this review.  But I also know that the majority have not, which is a real tragedy when considering the talent on display here, without even getting into the content yet, which is pretty powerful stuff.

The plot & substance of the film might be a little cheesy, a little “one person can save the world if he just stands up to bullies” kind of thing, but there’s real heart here that makes it difficult to argue with the idea that small shifts really can change the world.  There’s a pretty remarkable quote in this film that summarizes the point, and it goes “little beat big when little smart, first with the head, then with the heart.”  It’s first applied to P.K.’s boxing career, but quickly becomes a metaphor for his entire life, fighting against evil which at first seems much stronger, but can be beaten by pure determination.  The South African backdrop, a cute love story, and a solid moral; there’s a lot to like here in an excellent 90s flick that should be a bigger deal. Video – With an aspect ratio of 1.85:1 (16×9 Widescreen), the video quality is pure 90s VHS.  The film was shot using Panaflex cameras with Panvision lenses and views as a classic from the decade; not great clarity or quality but with a certain nostalgia that’s hard to deny.  The picture might not be very strong, but audiences will forgive the low quality given the time period in which it was filmed and of which it represents.

Audio – The DVD was done in Dolby Digital, with no audio options on the menu.  The sound quality is the same as the video; 90s.

Extras – There is one special feature on the disc; a trailer for the film. Highly Recommended.  For a film with these actors, this director, and such a fascinating plot, I’m shocked that it isn’t a classic, at least among more people.  I’m not trying to compare it to something as powerful as Dead Poets Society, but there are some similarities there that shouldn’t be ignored.  Young talent, stirring passion, beautiful backdrop; the possibility that this movie might actually touch you shouldn’t be played down.  The Power of One deserves more respect than it has received to this date, and although I doubt this review gets the ball rolling, I would be happy if some day something did.  The video & audio are dated & poor, though acceptably so, with only one extra on the disc.  Watch keeping 1992 in mind, but watch with confidence.