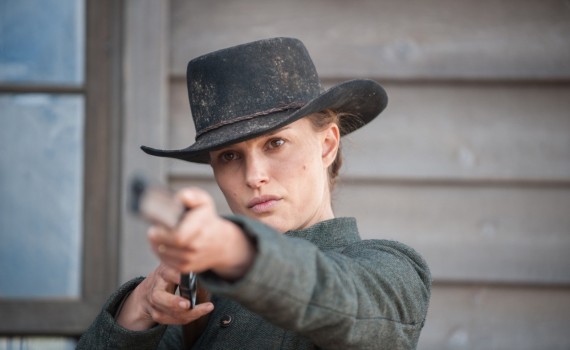 Who else could think of nothing but the Aerosmith song after hearing the title of this film?  I understood that it wasn’t this kind of flick, but I half expected a finale in which Steven Tyler began belting just as Jane starting firing.  Again, I get that such a scene would have ruined the dark style of the genre this movie was attempting to capture, but man would that have been cool.  Anyway.  Jane Got a Gun is a mood Western without an ounce of rock’n’roll in its soul, but with a desperate edge that feeds a desperate plot.  It might not quite reach Unforgiven heights, but it does deliver that terrible weight that you’ll remember days after, forcing audiences to feel the emptiness of the West and to count themselves lucky that they weren’t alive to die then. Jane’s backstory is …complicated.  Although, any woman who finds herself in New Mexico in this era didn’t get there by an easy road, making sacrifices & enemies along the trail.  Jane used to be engaged to Dan Frost, but Dan went & got himself signed up in the Union Army and left her to fend for herself.  For Jane, that meant heading West with a party of questionable men, which put her in some questionable positions.  Now, she’s married to one of them, an outlaw named Bill Hammond, a biggish guy who may not be the sharpest tool in the shed.  He once belonged to the Bishop Boys, a ragtag bunch of gunmen looking to settle a new town and watch the dirty money come rolling in.  Well, he no longer works for John Bishop, and recently killed some of his old buddies.

Shot up & dying, Bill is no good to anyone, and just succeeded in bringing down a load of trouble of Jane’s head.  Bishop & his men are on there way to finish Bill off, once they find out exactly where he is, and they will, given enough time.  Jane has just a few days, but that’s just long enough to drop her daughter off at a neighbor’s and to find a gun-for-hire who will help her protect her man.  The first gun she thinks of just happens to be Dan, her old beau, a man whose anger over losing Jane is still fresh after all these years.  He has no cause to love Bill, nor Jane anymore for that matter, and won’t be quick with a helping hand.  But the story of Jane & Dan isn’t simple, and as secrets are revealed love might prove to not be completely lost. Joel Edgerton should be in every Western made from here on out.  No actor, except for Tom Hardy and perhaps Michael Fassbender, is as hot right now as Edgerton, the man seemingly incapable of doing or choosing wrong.  And his prowess in a Western only continues that theme.  He’s a natural, a perfect piece to the puzzle, his inherent Australianness only adding to the grit & guts of his character.  I could watch the guy all day, especially in a role like this, and I do hope he signs on for more of this style in the future.  Natalie Portman though, not so much.  She felt out of place, her accent betraying her ability, her manner not quite matching the mood of the moment.  She’s a fine actress, but didn’t take center stage in a movie named after her character.  Neither did Ewan McGregor, who was a passable villain, but nothing special. Boyd Holbrook is someone to watch though; the kid has talent.

The film itself is a fine dark Western, but not strong enough to hold up when compared to others of its kind.  Recently I’ve seen The Salvation and Slow West, both of which are much better than Jane Got a Gun, and both of which deserve a second watch where this one barely deserves a first.  It’s a mediocre melodrama, a sad tale, a mood movie, a film that showcases the bleakness of this period.  And there are basically two scenes that jump out as high-quality: one with Noah Emmerich in a whorehouse and one with stirring dialogue between the two main characters.  But other than that, the aspects fail to impress in the way that the actors involved should make you anticipate.  There are too many phenomenal Westerns, both classic & modern,  to allow an average Western to survive.  Jane Got a Gun is simply average, and shouldn’t be sought after too quickly. Audio – Done in Dolby Digital DTSHD-MA 5.1, the audio quality is fairly powerful & well-balanced.  Subtitles are available on the Blu-ray disc in English for the Deaf & Hearing Impaired as well as in Spanish.  The sound is mixed rather well, with no balance issues between dialogue & effect.  The music mostly goes unnoticed, but the strength of the audio lies within the films conversations.

Extras – There are no special features on this Blu-ray disc. Recommended.  If Jane Got a Gun was meant to be a continuation of the strong female leads we’ve recently seen from Hollywood, then it was a partial success.  Portman is the lead, she grabs the role by the reins, she shoots guns, she’s not a pushover, she makes decisions, her lines aren’t demeaning.  But she never quite steps up far enough to reach Furiosa status, and Edgerton always has her beat by a mile.  He quickly becomes the best part of the film, with the general violent mood of the movie taking second place.  It’s the details that trip things up and keep everything from coalescing the way you’d like to think they could have.  The video is great, the audio nice, but there are no extras on the Blu-ray.  There are just far too many better options when considering this genre, too much competition, and Jane doesn’t win that gunfight.