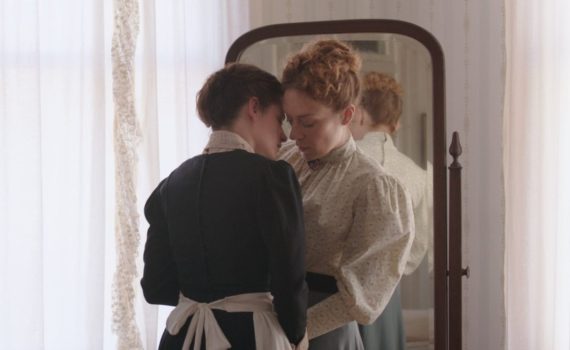 If I’ve said it once I’ve said it …probably twice; Kristen Stewart is an incredible actress who is ill-treated partly because of the crappy vehicle she decided to hitch a ride in to jump start her career and party because of the demeanor she exhibits that comes across to us as flippant and/or annoyed.  She found a way to become a star, now that she is one she doesn’t feel like she owes us anything, and somehow we’re mad about that, but that just seems like pure lunacy to me.  Stewart is a talented actor, she picks the roles she wants to pick, she talks to the media when she chooses, and nothing else is our business, at least that’s the way I look at it.  Her role in Lizzie might not even be her best, neither is the film itself, but she’s better than she gets credit for, and by a fair amount. Kristen Stewart plays Brigitte, who also goes by Maggie, since of yore Americans liked to call all Irish people by the same name apparently, but that’s not who this movie is about, so let’s switch gears.  The main character here is Lizzie Borden, played by Chloe Sevigny, who lives in Massachusetts with her sister, stepmother, and overbearing father.  Lizzie is getting closer and closer to becoming a old maid in 1892, why she’s all of 32!, and has become a burden on her family.  She’s odd, bossy, goes out unaccompanied, and is prone to seizures; her father is even considering putting her in an institution since she can’t seem to get married and therefore must be a maniac of some kind.  Turns out, Lizzie simply isn’t interested in men, in a time when such thoughts are strictly demonic.

Lizzie first befriends and then falls for the Borden’s new maid Brigitte, who is eager to be taught to read, needs someone to comfort her, and makes a nice change to the mundane day to day of unwanted daughter living.  The pair find something within each other that they were missing, and soon become quite close.  But at the same time, Lizzie’s father is sneaking into Brigitte’s bedroom unwelcome, as well as threatening Lizzie with losing her inheritance and being sent away if she doesn’t keep clear of her new companion.  Well, that won’t do, and so the ladies hatch a devilish plan.  What happens next is mostly mystery, as the Borden Ax Murders have never been perfectly solved, and no one knows the killer’s exact intentions, though the gruesome deed itself would go down in sinister history.

The most intriguing part about Lizzie is the relationship between the title character and the maid, and I have no idea how much of that was conjecture or assumption or perhaps even pure fantasy.  This obviously isn’t a purely historical account, there are some liberties taken, and perhaps this relationship is one of them, but without it, really, the film would have fallen apart.  I guess that’s the Kristen Stewart fan in me coming out, although it would be overdramatic to call myself such, but I do think she’s talented, and I do think she basically made the movie.  In this story anyway, the action wouldn’t have taken place without the two women bolstering each other’s nerves, and so it was desperately necessary, if not exactly true, and I’ll forgive some extra style for the sake of entertainment since it was quite needed.

It was needed because the rest is pretty boring, and couldn’t be left on its own because it never had the meat we wanted to sink our teeth into.  Lizzie, her family, her situation, the killings; it was sleepy, to be honest, and I’m not sure I understand why the tale is compelling enough to warrant our knowing Lizzie’s name all these years later.  Chloe Sevigny was not great, she’s not strong enough to do this on her own, she needed Kristen Stewart, and like I said earlier, this wasn’t Kristen’s best offering either; her accent was OK but she basically said every line with the same inflection.  Jamey Sheridan will always terrify me thanks to The Stand, so he was a good villain, but I wonder at him dying so easily; I wonder if there’s even more to this story than we already don’t know. But it’s not like we’re desperate to find out; at least not from this team.  They didn’t put together a compelling film, which should have perhaps been easy given the violent content.  But perhaps not, maybe it was harder than they imagined, which is reflected in the final product we were given.

Video – With an aspect ratio of 2.40 (16×9 1080p HD) and shot using an Arri Alexa SXT camera with Cooke S4, Speed Panchro, and Fujinon Alura lenses, the video quality of the Blu-ray is on par with its delivery; fine but not really enticing.  The color was muted, often dark, but the sets were pretty excellent, and I felt like they were really paying attention to detail when recreating the history.

Audio – The disc was done in English 5.1 DTS-HD Master Audio, with an option of English SDH and Spanish subtitles.  That’s it as far as the audio options, no more are available, and the music throughout is about as forgettable as the video.

Extras – There are just a bare few special features on the Blu-ray; Understanding Lizzie is a 10-minute featurette, there is a group of other trailers from Lionsgate, and the menu can be bookmarked. Recommended. Lizzie has an intriguing setup and some chemistry between its leads, but that’s as far as the positives go.  Either the story doesn’t support a dramatic retelling or this wasn’t the crew to tell it, because something was missing.  The movie was mostly boring with moments of quality, but those moments were too few and far between.  I wanted to enjoy the high drama, but the action was too muted and uneven.  Stewart was strong, Sheridan was scary, but Sevigny wasn’t up to snuff; I needed more from her as the lead actor and driving force of the plot.  The video is only OK, the audio is as vanilla, and the extras aren’t plentiful, so forget the technical aspects.  I can’t imagine who this movie was aimed toward; experts would probably find flaws, and the rest of us simply won’t be interested.