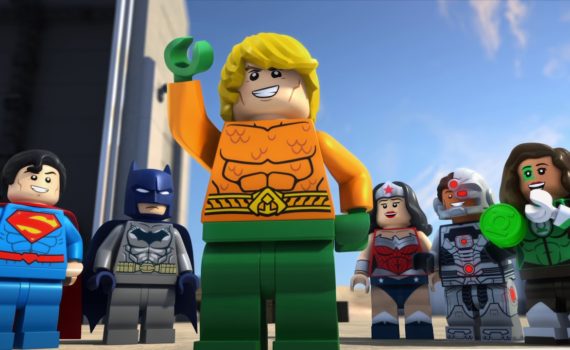 Alongside the releases of The Lego Movie, The Lego Batman Movie, and The Lego Ninjago Movie, Warner Bros. and DC have pumped out a series of Lego DC Comics Super Heroes films, straight-to-video, that play on our kids’ love for all things LEGO, all things superhero, and all things awesome.  This genre will suck you in if you let it; what’s not to love about your favorite characters in brick form on epic adventures?  But that doesn’t mean that the quality lives up to the anticipation of seeing your dreams come true.  These films stay out of theatres for a reason, and ultimately they’re just for your sons and daughters to enjoy, as they taste comic book action for the first time, and in a package that’s much less violent, much more silly, and just plain fun, at least as long as you’re under the age of 10. The Justice League is Earth’s first, last, and constant defense against the evils of aliens and bad guys everywhere.  It is made up of the mightiest heroes in the world, and there is no danger that they will not face for the good of mankind.  Superman, Batman, Wonder Woman, Cyborg, Green Lantern; there’s not a better team to be found, and no evildoer better test them.  But their most tentative member, Aquaman, isn’t exactly sure how he fits in, how his water skills translate to battle on land, or just how he can coexist with these legends.  He wants to prove himself by saving the day once in a while, but he makes more mistakes than he does highlights, and so each mission is a toss up.  He knows he can do the job, it’s just a matter of time, and of mistakes along the way.

The newest Green Lantern, Jessica Cruz, stepping in for Hal, is also nervous about how she fits into the group.  She can’t quite get her power ring under control; it does what it wants to, not what she tells it to, and she doesn’t really know how to command it anyway.  She’s not very helpful in a firefight, but she wants to be, and again, perhaps it’s just a matter of time.  But Green and Aqua better get their game faces on, because trouble is coming whether they’re ready or not.  In Atlantis, Aquaman’s stepbrother, Ocean Master, is planning a coup.  Along with his buddy, a Red Lantern named Atrocitus, he plans to take control of the city, the people, and the kingdom.  The Justice League will have to respond quickly and smartly if they want to avert disaster, and they’ll have to work together if they want to win. There’s something undeniably fun about these Lego movies; it’s like our childhood dreams come to life.  You imagined storylines as you played, but now you can see them on screen, and that’s something special, so thank you WB and DC, for creating something awesome and entertaining and transporting.  Also, kids love these movies.  Obviously the theatrical releases were the big deals, Chris Pratt and Will Arnett and all that, but these silly Lego videos have been a big hit with kids too, because they basically deliver they same content, just at a markedly poorer quality.  Still, I doubt you’ll find a 6-10-year-old who wouldn’t enjoy these stories, especially if they are anything like my son, who loves superheroes but hasn’t seen the darker, more adult versions quite yet.

But the special thing about The Lego Movie and those like it is that they appeal to adults as well; these DC Comics Super Heroes movies really don’t.  They play more like episodes of a Netflix original series than real films, and perhaps that’s as much as should be expected of them; they never claim to be the animated movie of the year.  Aquaman is a throwaway installment, not a stand alone movie, a bit of a disappointment if you’re expecting something strong, a bit of enjoyable fluff if you don’t have very high expectations.  The jokes fall flat, the action is predictable, the story is muddled, the characters are shells; it seems ridiculous to pick it apart too much, because it is what it is, but other films of this style have been successful, so there’s a chance for it to be better, it just isn’t. Video – With an aspect ratio of 1.78:1 (1080 HD 16×9), the video quality of the Blu-ray disc is acceptable but not stellar.  It’s a low-budget, straight-to-video production, so no one is expecting Disney/Pixar, and that’s exactly what we don’t get.  It’s a mediocre display of the Lego action we’ve started to enjoy, not on par with its contemporaries, but done well enough to entertain the kids if they’re already into the genre.

Audio – The disc was done in English 5.1 DTS-HD Master Audio, with an option of Dolby Digital French 5.1 and Dolby Digital Spanish 5.1.  Also, subtitles are available in English SDH, French, and Spanish.  The audio is completely forgettable, without a soundtrack to remember or awesome effects that stick with you after you power down.  The sound simply wasn’t important at all, and no effort was put in to make it so.

Extras – There are no bonus features on the Blu-ray, but you do get a cool limited edition Jessica Cruz mini-figure. Rent It. If your child has ever stumbled upon these movies in the Lego section of your local library, picked one up, and enjoyed it at home, then Aquaman will deliver all that they expect and enjoy.  It’s goofy, it’s bumbly, it’s action-packed, you know all the characters, and at 77 minutes it’s a quick and easy watch for a rainy afternoon.  I just can’t recommend that parents watch along with their kids.  The best animated features can be loved by the whole family; this isn’t that.  This is something for your kids, something disposable, something a little longer than an episode of a dumb show but without the content of a real film.  The video is only OK, the audio isn’t noteworthy, and there aren’t any special features, so don’t expect anything from the technical aspects, but hey, you do  get a mini-figure.