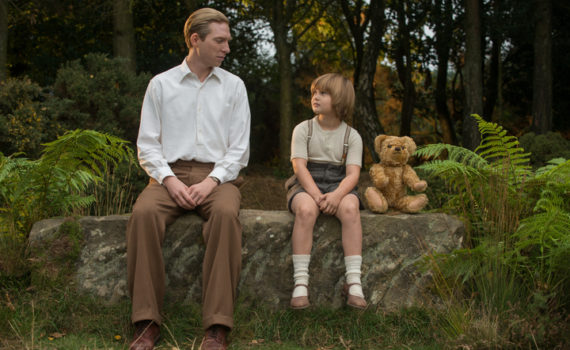 An imperfect but heart-melting melodrama, Goodbye Christopher Robin is a new Finding Neverland and another peek into the private world of an author’s inspiration.  Like its predecessor, this film follows a recipe guaranteed to play with our emotions.  A playwright, his personal struggles, the magic that both allows his artistic juices to flow and also heals the wounds of a life that didn’t turn out quite the way he would have written it up; we’ve seen but enjoyed it before.  And don’t forget the little boy who serves as inspiration but who has a life of his own, a child who is both a character to love and an individual who longs for it.  I don’t blame this movie for sticking to the script and betting on its ability to make us well up; it’s a smart idea, it was developed as well as the parameters would allow, and it succeeded, at least as much as can be expected. This is the true story of A.A. Milne’s classic books surrounding the misadventures of one very special bear, Winnie the Pooh. Milne was a veteran of WWI, an upper-crust author who couldn’t quite slide smoothly back into a life of parties and speeches after witnessing the horrors of the trenches of the Front. So he moved his family to the countryside to seek fresh ideas, but he never imagined that they would come from within his own home and from the woods surrounding it. Milne’s son, named Christopher Robin but called Billy, loved imaginary journeys through the forest, and these fictions combined with his adoration for stuffed animals led to the idea that would become one of the most successful family franchises in literary history.

But fame doesn’t come without a price, and as Christopher Robin became such a public figure, Billy lost what he needed the most; a unique connection with his parents and a world that was all his own.  He became a stunt to parade throughout the country to sell books, and the life that is owned to a young boy was taken from him, replaced with a celebrity he didn’t want.  His nanny became his closest friend, other than his beloved stuffed bear, but the dynamic within the family would soon tear things apart, from his nanny to his parents, as fame burned away the beauty that was the essence to the entire magic of Pooh.  Reclaiming the past isn’t easy, nor is piecing together a crumbling home, but with love, hard work, and a little faith, anything is possible. It really was as if Domhnall Gleeson took over Johnny Depp’s role, which is fine because they both have a random ‘h’ in their first names.  The characters’ situations were similar, Berry was even mentioned in the movie to be at a Milne play, the boys were equally cute, and audiences were given the opportunity to see the why behind the what.  I really don’t mean that as a negative though, I’m sure there are countless books I would be fascinated to the know the meaning behind, and I’m also sure that many of those are very personal and perhaps even sad.  Goodbye Christopher Robin is predictable in that way, somber and sobering, but with a magical quality that can still give you a smile.

Gleeson is good not great as Milne, Robbie seems to be phoning in her performance, Macdonald and the kid basically stealing the show.  The woods are beautiful, the meanings are clear, I’m glad I learned; just don’t expect Oscar-winning aspects to assail you as you watch, this is Finding Neverland content without being exactly the caliber.  Director Simon Curtis always focuses on true stories, but his talent for crafting them into cinematic hits isn’t quite honed.  He’s only ever done two other feature films (My Week with Marilyn, Woman in Gold), and his lack of experience in that department shows each time he steps behind a camera.  His movies are good but not great, real but not moving, they simply fail to reach the next level.  This attempt is no different, an average drama with some solid elements, but not something we’ll remember in a year. Video – With an aspect ratio of 1.85:1 Widescreen, but with little other detail available beyond that, this Blu-ray disc will disappoint those looking to be blown away by incredible visuals, but will satiate those simply looking for a crisp picture with lovely colors.  Many scenes focus on the woods, the country home, the boy and his bear; they are pleasant to view, rich in hue, but not exceptionally noteworthy.

Audio – The disc was done in English DTS-HD Master Audio 5.1, with options of English Descriptive Audio 5.1, Spanish Dolby Digital 5.1, French Dolby Digital 5.1, and multiple other languages.  Subtitles are available in English SDH, Spanish, French, and many other languages as well.  The soundtrack to the film is quite nice, if not exactly memorable, and the same goes for the sound quality as well.

Extras – There are many special features on the Blu-ray disc.  Commentary by Simon Curtis and Franck Cottrell-Boyce can be accessed here or in the Audio Menu.  A collection of Promotional Featurettes are available, including A Walk in the Woods, Healing a Nation, A.A. Milne, Hello Billy Moon, Daphne Milne, The Story, Christopher Robin & Nanny Olive, and The Cast.  There is an image Gallery, a Theatrical Trailer, and Sneak Peeks of three other films. Recommended.  The biggest hurdle to loving Goodbye Christopher Robin is that we’ve seen it before.  Yes, it’s a different true story, and yes, it focuses on the life of the boy a little more than the life of the writer.  But still, this film carries a Finding Neverland feel from start to finish, and so audiences can only find themselves so impressed.  We know this formula, we like it, we’ll watch it, but if you don’t add anything else to the mix we’ll forget your concoction and we’ll move on.  The video was nice, the audio fine, there were some bonus features, but the technical aspects won’t be enough to hook us.  And the movie won’t either; it’s merely good, never great, and will be forgotten, which in no way means that it’s terrible, but isn’t a ringing endorsement either.