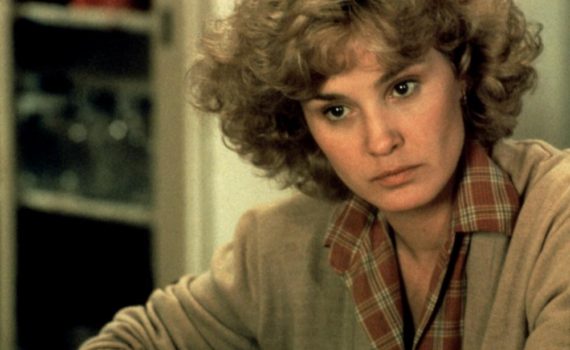 For Country, Jessica Lange was nominated for a Best Leading Actress Academy Award, ultimately losing out to Sally Field in Places in the Heart, five years after she won her only other Oscar for Norma Rae.  Three of the five films in the category in 1985 were about farmers, families, floods, failed crops, that old chestnut, and the other two were period pieces, so there was some tight competition in a tight window, and who really stands a chance against Field anyway, she’s so damned likeable.  Lange has had her chances to shine, and she’s been a part of many an iconic film, but perhaps it’s right to consider this movie as one of her strongest examples of talent; a simple-on-the-surface role that couldn’t have been so simple to play, a character that’s at once an everyman and an everywoman. The life of an Iowa farm family is anything but glamorous.  They work all day, all seasons, pulling in just enough money from crops and livestock to stay alive themselves, to warm their homes and feed their children.  One bad crop puts you behind, one broken tool costs you time and money, one sick kid destroys your savings, and nothing gives you the excuse to quit working, each morning it’s back to the grind.  The father reaps the corn, the grandfather drives alongside him, the son learns the trade, the mother takes care of the home, and the daughter takes care of the littlest ones; it’s a grueling life, a gray-brown life, but one that some were born to live, having been raised on the land and having known from their first steps on it that it would always be their home.

For the Ivys, tough times are only getting tougher, and they aren’t the only farmers to feel the steady trickle of stability eek away under their feet.  After a lack of rain and a bad storm, the Ivy’s corn crop isn’t what they expected it to be, and the money it brings in just isn’t enough.  The bank is tired of constantly handing out more loans to farmers whose farms aren’t turning a profit, and so they finally put their feet down.  This means that Gil and Jewell Ivy will either have to come up with the money to pay off their loans, sell some of their land and equipment, or move off the farm, a place that’s been their family’s home for generations.  If all the locals could come together and fight the banks, they might be able to force some change, but that will take grit and determination; luckily farming folk don’t lack either. Both Jessica Lange and Sam Shepard were relative newcomers to the screen in 1984, although they had both previously been in Frances in 1982, for which Lange was, again, nominated for Best Leading Actress.  But other than that, Lange had King Kong and Shepard had The Right Stuff, neither had become a big star yet, but both would show up for this niche drama and perform wonderfully.  The main thing they did right was to play their parts understated, which was smart, and which fit the mood and times better than a melodramatic interpretation.  They were convincing as farmers, as Americana, and representatives of a way of life that was slowly dying.  In a time when films loved focusing on social justice, and especially on farmers and workers and the like, Country fit right in and its leads did it justice.

Wilford Brimley even makes an appearance and does very well; I’ll always love him for Our House, a 2-season family-oriented TV show that I watched when I was little.  Looking back, I watched far too much Touched by an Angel-type television; it exposed me to certain actors and a certain style I guess, but I doubt if that crap was ultimately good for me.  Anyway, moving on, I think the story in Country absolutely does have a positive message worth hearing, mostly, and should be remembered for what it did well.  It’s a simple movie, uncomplicated and focused, giving us one direction to lean in and one family to love.  In that way, it succeeded, but watching it all these years later, it is a little simple, a little sappy, and doesn’t stand up perfectly straight.  You give films like these a pass because they’re emotional and they’re dated, but then you remember that there are magnificent movies from ever era, perfect pieces of cinema from every year, and perhaps being forgiving just because, to something from 1984 (which boasts Amadeus, The Natural, Karate Kid, and The Killing Fields), is going a little too easy. Video – With an aspect ratio of 1.85:1 (1920x1080p), the video quality of the Blu-ray is poor but rich enough, if you’ll excuse the semi-related pun.  The quality is by no means impressive, but audiences will understand what year they’re watching and how technology has changed over time.  At least the transfer was done properly, with no glaring issues, so the film watches as it would have at the time and doesn’t fail its standard.

Audio – The disc was done in English, with an option of English subtitles, and available audio commentary by film historian Lee Gambin.  That’s it, no other languages or subtitles or options, you get what you get and you don’t throw a fit.  The sound is fine, keeping everything in mind, you won’t expect or receive better, and it’s nice that there weren’t significant problems in the transfer, so cling to that.

Extras – The only bonus features are four trailers for films from this company. Recommended.  While Country isn’t an amazing film on its own, it’s at least a small sliver of cinematic history to enjoy and reflect upon, a movie that worked and had a message and tried its best 35 years ago, which is not nothing.  It features solid performances and a simply story, so you won’t hear many complaints from me; how many modern movies can honestly claim the same?  But its also far from perfection, an uncomplicated tale of an American life that we all know exists and aren’t super-excited to watch films about.  The video is par for the era, the audio is lackluster, and there aren’t many special features, so leave the technical aspects behind and focus on the content, which isn’t terrible.  Lange is good, Shepard is good, the plot is good-ish; sometimes you can’t give a product your ringing endorsement, but that doesn’t mean it doesn’t hold some intrinsic worth.