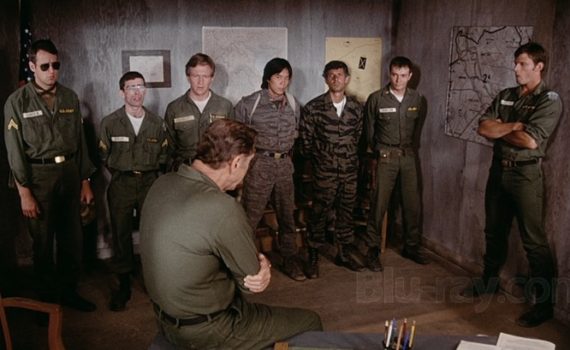 Ted Post liked to direct Clint Eastwood in the 60s and early 70s; I guess that would have been like directing Tom Hanks in the 90s, an almost guaranteed success and a huge crutch for any filmmaker.  Rawhide, Hang ‘Em High, Magnum Force; that is some of Post’s best work, and he threw in Beneath the Planet of the Apes for good measure.  But the magic would run out when Post moved toward the end of his career, and Go Tell the Spartans is definitely not an example of his prime years.  Burt Lancaster and Co. couldn’t deliver a strong enough product to support the message that was being relayed, an expose on war that made its point without making the grade. The French failed to control a volatile situation in Vietnam, and now a rebel force is fighting the Southern government, a communist regime rising up to threaten the democracies of the free world.  At least, that’s how the situation was viewed by the powers that be, and the Unites States felt like it must act in order to keep the Viet Cong from taking control of Southeast Asia.  Military units were sent in to support the friendly Southern government and to assist them in taking down the rebels, but the guerilla warfare of the jungles takes its toll on men not used to the grueling terrain and the ever-changing politics, proving that this budding war would be a quagmire without a discernible end.

Major Baker is in charge of a rag-tag unit deep in country, where attacks come from all angles and from the least likely of places.  He recently sent a squad to control an abandoned village, a spot that could prove vital to the strategy of the war, or could simply anger the Cong and force them to annihilate the US force on grounds of principle.  It’s a thankless and pointless job, sending men to their deaths fighting a war that isn’t their own, but, well, someone’s gotta do it.  Baker’s men include Courcey the draftee, Oleonowski the vet, Olivetti the right hand man, and a corporal named Abraham Lincoln, all of whom will be lucky to return to base alive. Post’s earlier work showed talent, but this late addition offers nothing other than a weakly told story about a fight we all know should never have been fought.  Perhaps in 1978 the message was a bit more powerful, a veteran director painting the Vietnam War so bleakly and so pathetically, but now it simply seems like a waste of film.  There isn’t a personal story here, not really, it’s more a commentary on how stupid things were there back then, on how little the military knew what they were doing and why they were doing it.  Again, not an ah-ha moment anymore, the consensus seems to be that the war was one we entered without much thought and then lied about for years, so this film may have lost some of its potency over time.

Burt Lancaster sure had; he was 65 at the time and showed every year of it, not succeeding as believable for a minute.  And his dialogue might have been even worse than his presence, not that his lines were his fault, they simply fell flat on the dirty floor and lay their dying while audiences tried to understand why anyone would ever say them.  The rest of the cast wasn’t much better: Craig Wasson who would go to be in A Nightmare of Elm Street 3, Marc Singer is best known for The Beastmaster, and Jonathan Goldsmith, oddly enough, would become The Most Interesting Man In The World for Dos Equis.  Weird, but their performances here were ever stranger, as none of them ever got into the groove, always making the movie feel much more like a skit, not something to be taken seriously, although that was obviously the unearned objective. Video – With an aspect ratio of 1.85:1 (Widescreen), the video quality is poor even when taking the transfer and the era into account, a grainy mistake that was shot about as well as it was performed.  They tried their best to bring the war to life, and the message was heard, but the visuals along the way were either amateur or simply badly done.

Audio – The DVD was done in English, and that’s all we get as far as audio, information, languages, or subtitles.  There is a bit of music to help move things along, but it’s in no way memorable.  Some Vietnam movies use protest songs as a way to help audiences feel the time, but this film came from a different angle, which was probably a mistake. Rent It.  Go Tell the Spartans fails as a war drama, an expose, a period peek, whatever genre you want to fit it in, and there weren’t many redeeming qualities to save the day.  The point was clear, I’ll give them that, but it wasn’t delivered well, and no one in the cast had the power to force the film to be any better than its low ceiling dictated very early on.  Even the Spartan reference was weak and ill-used, and should probably have been left on the cutting room floor.  The video is no good, the audio is nothing remarkable, and there aren’t many bonus features, so it’s best to ignore the technical aspects of this movie, since it barely has any.  Best to ignore the entire project I think; there are better versions of this idea out there, and they are numerous.