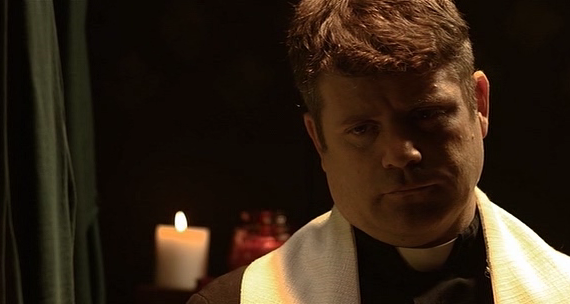 I had the misfortune of seeing a Timothy Woodward Jr. film once, and I forgot to never do it again.  Actually, I just didn’t notice that he was the director of this film as well, otherwise I would have passed.  The movies I am referring to are Throwdown and Checkmate; great titles, huh?  Throwdown is a terrible crime/action/thriller starring Woodward himself and featuring Mischa Barton & Vinnie Jones, among a large cast of others.  It’s a terrible, terrible movie, with a ridiculous plot and some of the worst acting you’re likely to see.  Checkmate reprises a large amount of that film, including Barton & Jones, and delivers the same pointless violence & undeveloped characters as has become the director’s forte.  But, if it’s possible, this time around was worse than before, taking steps down from terrible and becoming something completely unwatchable & rather insulting.

Try to follow along, because this won’t make any sense at all.  Lauren & her husband are trying to have a baby after many failed pregnancies, with multiple scares and spells of best rest making this magical time very stressful.  Joey and his team of criminal buddies are planning a heist, a score that will set them up for life and take them away from the world of small-time crooks.  A priest and his assistant are actually contract killers, assassinating in the name of God for the right price, making no judgement as to the why of the matter. And above it all hover a pair of men gambling over a game of chess, a match that has higher stakes then any of us can imagine.  These characters’ dramas dominate their lives, and lead to one giant, unholy climax.

At a bank, each story intersects and changes the fates of complete strangers.  Lauren goes to the bank to write a check, even though her doctor has ordered her to rest.  Joey the Bro leads his crew on a high-stakes robbery that doesn’t seem well thought out.  The priest sits with his sniper rifle high in a building, watching his target complete the organization of his finances.  And, still playing the game, two men raise the ante as their chess match creeps closer & closer to its finale.  This is a story of interwoven lives, how each of us affect one another, how things can go downhill in the blink of an eye, and how there is always hope while their is breath.  Who will make it out alive, who will die, and who will win control?

I didn’t think it possible, but Timothy Woodward Jr. has outdone himself.  He has made a film that is worse than Throwdown, a movie that’s bad in every single way, and something I wouldn’t wish on my worst enemy.  It all starts out with one of the most awful opening scene that I have ever witnessed.  SWAT teams, criminals, pregnant asthmatics, guys with machine guns blasting away at each other for what seems like just the fun of it; at one point I actually yelled out in anger & frustration.  Woodward seems to have no idea how to construct a story, thinking that crime existing & police arriving are enough to make a good movie.  Sorry pal, you need a little more than that, like acting & interest & talent & writing & characters.  All these things are absent from Woodward’s projects, making it insane that he created six movies in 2015 alone.

And they all seem to star Barton, Jones, Woodward himself, Danny Trejo, Johnny Messner; terrible actors, basically, with a hot girl or action star thrown in sometimes for sex appeal, name recognition, or simply good measure.  These movies are all the same; messy action-fests that have no point, no anchor, and no hope.  And yet, someone is paying for them to be made, which is beyond understanding.  Checkmate might be the worst of the bunch, with absolutely nothing to enjoy.  I have no problem with language, but every ‘fuck’ seemed forced, all one million of them, and every curse pretended, as if the actors were told to “be hard” but had no idea what that meant.  Barton was a terribly weak heroine, Sean Astin was laughable as Father Death, and whatever metaphor Woodward was trying to create with Vinnie Jones & Danny Glover as the Devil & God was too stupid to be appreciated.  I will never watch another film from this series again.

Video – With an aspect ratio of 2.35:1 (16×9 Widescreen), the video quality is possibly the best this film has to offer.  There’s enough action and motion to highlight a high visual quality, at least as far as color & clarity.  Cinematographically, there is nothing eye-catching about his movie, with no talent in capturing the imagery of any scene.  The picture quality is nice, but, again, perhaps the only positive this film has in its favor.

Audio – There are two audio options on the disc: English 5.1 Surround or English 2.0 Stereo.  There are also two subtitle choices: English SDH or Spanish.  The sound quality of the film is forgettable, with neither glaring problems nor memorable moments.  I guess the action sounded fine and was fairly balanced with the dialogue, so no points off there.

Skip It.  I can actually think of one person who might enjoy this genre of film, so perhaps there are others as well.  Throwaway action, explosions, guys with guns, overdrama, SWAT teams, katana blade fights; maybe there’s a bit of fun here to entice those who like their movies cheap & easy.  But for the rest of us, this is about as bad as it gets.  Checkmate is a skit more than it is cinema, something thought up quickly with no effort put toward making it a cohesive film.  It’s a recipe for disaster in my eyes, but one Timothy Woodward Jr. must be making enough money off of to continue dipping back into the same, bubbly pot.  The video quality is good, the audio fine, the extras minimal.  Don’t come looking for The Departed, and don’t expect a real movie in much of the sense of the word, because this genre is something entirely its own, something that I won’t be curious about again.