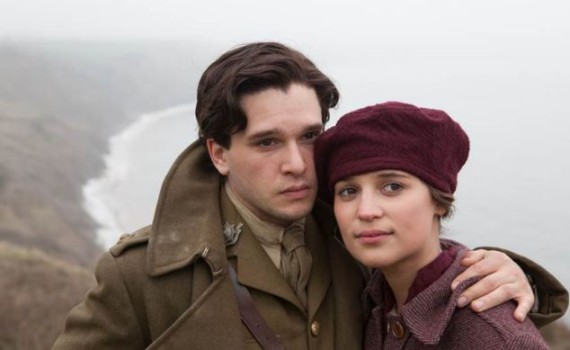 Atonement set the modern bar for World War romance, beginning what could easily have been a ten-year trend.  With driving drama and and an idyllic first half, it spun a story like a web, crossing carefree youth with adult responsibilities in a way audiences can convince themselves they relate to, in a manner that screams stage more than period piece, but delivers all we want from both genres.  Based on a best-selling novel, set at home & then abroad, following new love as it side-steps the mines of war, Atonement was a solid stone in the cinematic river.  And Testament of Youth settles down right beside it, beginning a ford when others flow by, starting the connection between two styles, the period romance and the hell of war.  It is a film of poignant revelation and deep sadness, going down a darker tunnel than those that have come before, but exiting into the light in a manner that both captivates & remains. This is the true story of the wartime experiences of Vera Brittain, an English writer & activist born in 1893.  It tells the tale of a group of youngsters in their carefree days before the beginning of the great war, and how that war changed their lives, their country, and their futures.  Vera was a well-to-do young lady of the early days of the 20th century, set down a path that would make her a wife to a rich man, the keeper of a household.  But she wanted to be much more, a thinker & a scholar, a writer of beautiful prose and purposeful novels.  With her brother Edward’s help, Vera would convince her parents to let her attend Oxford, beginning her career as a woman who earns a wage for herself, not by the grace of her husband, something Vera had sworn would never impact her.  But just as her tenure at college began, events outside her control changed the world.

World War I began with an assassination and many declarations of battle, but its real genesis was in the homes of boys, where young men felt their duty calling them, where the fantasy of war was still exciting, where hope still ruled the mind, convincing everyone that a few moths would see justice served and men returned home.  Vera’s brother would volunteer, as would her good friend Victor, and also her new-found beau Roland, a melancholy man whom she fell in love with despite all decisions to the contrary.  And so Vera herself joined the effort as she could, nursing in the hospitals and at the front, seeing what war actually was with her own eyes, watching men die all around her, feeling the constant fear of losing those she loved.  This experience would define her life, change her course, and make her the woman she grew to be. Like Atonement, Testament of Youth begins with English wealth and the young passion that so often fuels the marvelous love stories we’ve come to idealize.  It begins as a period piece, with the costumes and the pageantry, the stodgy parents and the chaperoned outings.  We see the English countryside, the beautiful homes, the lofty dreams, and we hope it can all end as lovely as it’s imagined.  But of course events take a turn for the darker, as war approaches and decisions are made that lead to violent deaths.  This balance of wonderful lightness and crushing weight has worked countless times before and will work again, playing upon the audience’s desire to hope for the best, even when knowing that the worst it coming.  Testament sets itself aside just a bit with its pacing, slowing the action down when Atonement speeds things up.  Events roll slowly but steadily toward the edge of a great, unavoidable cliff, creating a plot that’s sad and inevitable, fascinating but morbidly so.

It’s a well-made tapestry of deep emotion, combining the romantic period piece with the war drama, elevating itself with a true story that’s not just about love but humanity as well.  Brittain would go on to become a noted feminist & pacifist, taking the lessons she learned in war and speaking on what they ought to have taught us.  Credit Vikander for taking this movie on single-handedly, putting it all on her shoulders, and carrying the weight without faltering.  She was impressive, and after a few lackluster performances (Son of a Gun, The Man from U.N.C.L.E.) it was greatly appreciated.  I should also recognize the stellar work of young Taron Egerton as Edward, an actor who burst onto the scene in Kingsman but shows here that his talent is real.  Kit Harington was a bit too broodish, a bit boring, and I didn’t love him here, but he may have been the only character about whom I can say that.  The film was solid in every area, with breathtaking cinematography and admirable restraint, when every shot could have been bloody battlefields.  With a slightly slow pace, you might find yourself ready for the end, but only after appreciating a well-crafted film that follows a beaten path with eyes on a new perspective and a mind toward deeper places. Video – With an aspect ratio of 2.39:1, 1080p HD, the video quality of the Blu-ray disc was nothing less than stunning.  Color, vibrancy, attention to detail; a wonderful cinematic eye was in full effect, allowing each scene to sparkle.  This, perhaps, aided the slower pace, but what we lost in speed we gained in brilliant imagery.  The picture quality of the film was a great highlight, from the appearance of Vera’s costumes to the way each flower shone with its own inner light.  Testament of Youth was a visual wonderment.

Audio – With more audio options than I have ever seen available before, the Blu-ray gives a wide breadth of choices to those all around the world.  The audio of the disc was done in English 5.1 DTS-HD Master Audio, with alternative options of English Audio Descriptive Service, Czech, Hungarian, Polish, Spanish, and Thai.  A wide range of subtitles can be selected as well: English, English SDH, Bulgarian, Chinese Traditional, Croatian, Czech, French, German, Hindi, Hungarian, Indonesian Bahasa, Korean, Polish, Romanian, Serbian, Slovak, Slovene, Spanish, Thai, and Turkish.  The sound quality was superb, with a perfect selection of music and a wonderful clarity in the audio.

Extras – There are many special features available on the Blu-ray.  Commentary with Kit Harington & James Kent can be selected & enjoyed along with the feature.  Testament of Youth Behind the Scenes is a 6 minute making of segment.  Deleted Scenes can be played individually or all at once: A Painless & Noble Death, Spill the Beans, A Walk in the Woods, A Request to Miss Lorimer.  And seven trailers are available to watch: Testament of Youth, Aloft, The Diary of a Teenage Girl, Irrational Man, Jimmy’s Hall, Infinitely Polar Bear, Grandma. Highly Recommended.  Comparable to Atonement in many ways, Testament of Youth might actually be a step up.  Not in entertainment, and not in quality perhaps, as both films delivered masterfully, using current young stars and intrinsic drama.  But while the former is fiction, the latter is true, allowing audiences to understand the brutal nature of both humanity & war in a very personal way.  Taking the life of an extraordinary woman and dissecting in into its integral parts, we are able to truly understand her character, her actual life experiences, and the world in which she lived.  Done with precision instead of melodrama, this film is memorable in both its style and its message, only failing to produce a perfect pace, something that is barely a flaw.  The video is incredible, the audio strong, and there are many extras for viewers who want more.  A period piece, a war story, a coming-of-age tale, and feminism at its earliest stage; this is a movie worth while.