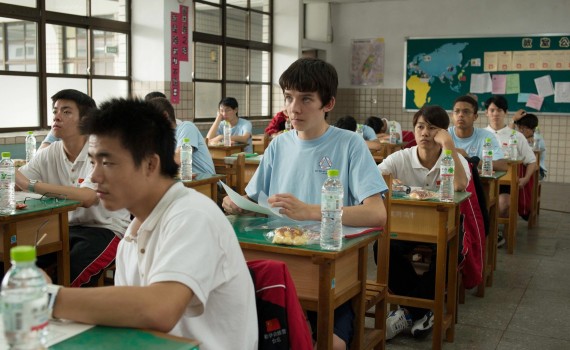 Like Little Man Tate with English accents, A Brilliant Young Mind is the British version of the sensitive savant story we’ve seen played out before, but with a dose of heart that even the most cynical won’t be able to ignore.  It’s a combination of Searching for Bobby Fischer and The Wizard, a story that we can’t possibly relate to on the surface, the coming-of-age tale of a genius who couldn’t be normal if he tried.  It’s a stale idea perhaps and inherently difficult to understand on a personal level, since the vast majority of us will never understand the difficulties of autism, high intelligence, or a general inability to connect emotionally with those around us.  But it’s the filmmakers’ job to bring the audience into the fold regardless, to show us the pieces of the tale that we can relate to, how this boy’s plight is our very own in a very real way.  And, surprisingly perhaps, they were able to do exactly that. Nathan Ellis has always been different.  His high IQ & autistic tendencies set him apart from other children his age, and had his parents worried that he would never find something that made him truly happy.  But after professional testing and prodding the boy into showing an interest in a specific category, a preference appeared; math.  And not just a preference but a talent, a way of seeing the numbers unfold in a way that only a handful can understand.  What makes Nathan even more special is his age, picking up on concepts far more mature than his youth.  But a gift is a gift, and he has a gift for math, a passion that made the pursuit of mathematical problem solving the thing he liked most in the world.

After a family tragedy, Nathan’s desire to touch the outside world diminished even more, turning him more inward that ever, directing him toward numbers with a renewed vigor.  A once-brilliant teacher named Martin would take Nathan under his wing and show him the math world, including the International Mathematics Olympiad.  As he grew older, reaching the Olympiad would become the only thing that was important in his life, replacing even his own mother, a kind woman named Julie who never could relate to her own son, only try her best to accept his tendencies and love him all the more.  But now Nathan is growing up, traveling on his own, competing with geniuses like himself, and learning that his special gift isn’t exactly his alone. It might sound cheesy, but geniuses are people too, you know.  At least, that’s the silly fact that you realize you hadn’t realized after watching this film.  What starts out as another untouchable genius movie quickly becomes a story about so much less, in a way, so much simpler a concept.  We all want love, we all want purpose, and we are all confused at times, often leading to bad decisions and bad behavior.  Nathan, though diagnosable, is no different than the rest of us; struggling to grow up, struggling to understand emotions, struggling to let go of a tragic past.  I’m no clinician, and someone who has more experience with autism could probably find fault with the simplicity with which our hero learns & changes & grows up.  But as far as judging it solely as a motion picture, Nathan’s character became an example of so much in a very short amount of time.

And I never thought that I would be able to get on board so easily with the film, and also perhaps it’s not perfect cinema after all.  But combining a standard setup with a little raw emotion & a few good actors proved to be just enough to soften my critical heart.  Asa Butterfield is not my favorite, and his childhood fame is a burden rather than a blessing, but the kid was solid here, sliding right into a role that could not possibly have been simple to play.  The rest of the team though, them I loved coming in, and not once did they disappoint.  Sally Hawkins is so easy to enjoy, Eddie Marsan is naturally hilarious, and Rafe Spall I couldn’t say enough about.  Shaun of the Dead, Hot Fuzz, Prometheus, Life of Pi, I Give It a Year, The World’s End, What If, The Big Short; the guy doesn’t have a name that pops to the surface, though you’ve probably seen him around, but he’s proven his tremendous talent time & time again.  Simply put, this movie gets you when you aren’t looking and is better than you might expect. Video – With an aspect ratio of 2.40:1 Anamorphic Widescreen, the video quality of the DVD is par for the course, nothing either distracting or memorable.  With a drama such as this, audiences don’t expect stunning visuals or impressive cinematography, and they won’t find it here, as attention is paid to character development rather than scene development.  The few instances where numbers were showing up in the world around Nathan were rather pathetic and are best forgotten.

Audio – The film was done in English 5.1 Dolby Digital, with subtitle choices in English, English SDH, and Spanish.  That’s it, that’s the audio of the film, and the menu is about as exciting as the actual sound of the film.  The music was rather typical & boring, but the balance of the film was fine in a general sense.  Don’t look to this movie for technical prowess.

Extras – The only special features on this disc are three trailers: The Walk, Concussion, Goosebumps. Highly Recommended.  If you let A Brilliant Young Mind suck you in, you’ll find yourself actually caring about the characters and hoping for a happy ending.  Pretty pathetic, I know, but that’s the power of this film, even rising above its own diluted genre to become something slightly better than expected.  Give credit to the cast for managing to develop something that went beyond the classic genius film; Butterfield for perhaps his greatest performance, which isn’t saying a great deal maybe, Hawkins for being a wonderful mother figure, Marsan for being funny but loveable, and Spall for a complicated character delivered with rare talent.  Had he not been here the film might have lost a star; the guy is that good.  As it was, this movie is a bit of a sappy coming-of-age dramody, but one I think we can all get behind.  The video was OK, same goes for the audio, and the extras were minimal.  Watch with a bit of a softened heart and you should do just fine.