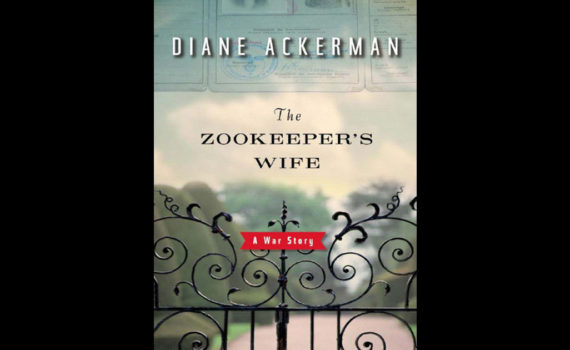 In this case, I saw the movie before I read the book, when it’s usually the other way around.  I heard WWII and the Warsaw Ghetto and my interest was piqued; I’ve always been fascinated by the time period, and its stories move me.  Now, I’m not alone in that, Hollywood knows that we’re desperately drawn to the Holocaust, that they can give us any taste and we will eat it up.  This isn’t merely morbid, I believe that we are legitimately and rightly haunted by what the Nazis did, that we may never fully move past it, though it may not have directly affected our lives.  This book tells a tale that everyone should know, one of hope amid madness, something to cling to when so much from this time period is simply ugly.

Jan & Antonina Zabinski ran the Warsaw Zoo in the 1930s, as war approached their city and their animals.  Hitler was stretching his arms, reaching for whatever he could pull to his vile bosom, and Poland was next.  The Nazis bombed the city to rubble, took control, forced every Jew into one neighborhood, and began ruling with an iron fist.  The Zabinskis survived as they could, protecting their animals as much as was possible, shipping the rest away to other zoos, mostly in Germany.  But with their occupation gone came a void that was to be filled with a much more important task.  They began to host “guests” from the Ghetto, Jews who would live quietly with them for a time before being sneaked away in the countryside.  They saved hundreds of lives by opening their doors, though their own lives were in jeopardy the entire time, right under the nose of the German army.

It’s a hell of a true story, one that gives you some hope in humanity.  Not Jewish themselves, the Zabinskis weren’t content to sit the war out, they wanted to help, they needed to save as many as they could, and so they hid people in the very cages of their zoo, when one wrong word over the course of years would have meant the deaths of dozens in the household.  This kind of bravery can’t be overstated, and they deserve every honor they have received as they go down on the right side of history.  The book is written in a very strange manner, especially at the beginning, weaving together many different points of views: actual history, Antonina’s diary, musing on what actually occurred, and pure fiction.  But as the book progresses, we delve into the history of the city even more, the Zabinskis becoming our guides in a way, even more than they are main characters.  It’s fascinating stuff, some hard to accept, like the pure numbers of the Ghetto Jews and the unspeakable evil that was brought down upon them.  For those interested in this time period, I highly recommend this novel; it weaves non-fiction with fiction very well, especially after a start that is bumpy at best, but quickly smooths out into high-quality storytelling.