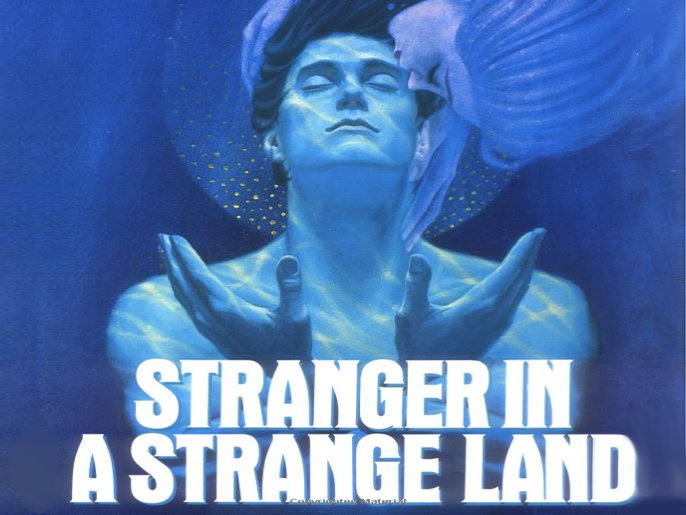 Stranger in a Strange Land is one of the strangest books I have ever read, and I don’t even wince at the banality of using that word to describe this novel because it fits so impeccably well.  It’s also one of the most popular science fiction stories ever read, as well as an incredibly controversial one.  I actually nearly gave it up about half way though, deciding that it was as stupid as it was boring, as poorly written as it was thoughtless and pointless.  But I stuck with the characters a little longer, and I’m glad I did.  SIASL might take its time to develop into something important, to show us that it has something to say, but patience will be paid in full, if you can open your mind to something both bizarrely abstract and somehow decidedly brilliant.

Valentine Michael Smith, the first human born on Mars.  Raised by Martians as well, he’s entirely of that planet, except in the most basic biological sense, and he’s just come to Earth on an order from the Martians themselves.  His role as envoy is unspecific, as is his place in modern, human society, a global construct that has survived a third World War and is run by a world government and large religious organizations.  Due to be awarded the planet of Mars and all its wealth because of his birthright and a unique set of legal circumstances, Smith’s very life is in danger, although he would say himself that he does not fear to discorporate.  He befriends a nurse name Jill, she smuggles him out of captivity, and with the help of the immensely wealthy Jubal Harshaw, the pair find love and happiness together, as they explore the boundaries of culture, religion, sex, the afterlife, and human understanding.

It’s wild the amount of ground covered by this book, from what happens after we die to why we need to wear to clothes.  It’s a sexually freeing tale, which is why it was so controversial in the 60s, painting communal and carnal freedom as a wonderful way of life.  It’s not just about sex though, the book delves into some very deep chasms of thought; political, moral, societal, theological, you name it.  That can be overwhelming, especially at first, and especially combined with the large amount of dialogue, most of which seems absolutely ridiculous and flippant.  But the point is coming, or perhaps the points, if you can just hold out until the end.  Heinlein develops a unique language of sorts (do you grok it, water brother?), that has found its way into the English language and will remain in my mind forever, akin to King’s Dark Tower parlance.  There’s no arguing this book’s impact, staying power, or conversation-fueling ability, and it will remain one of the most powerful sci-fi novels ever written; whether you can bring yourself to actually like it is a horse of a different color.