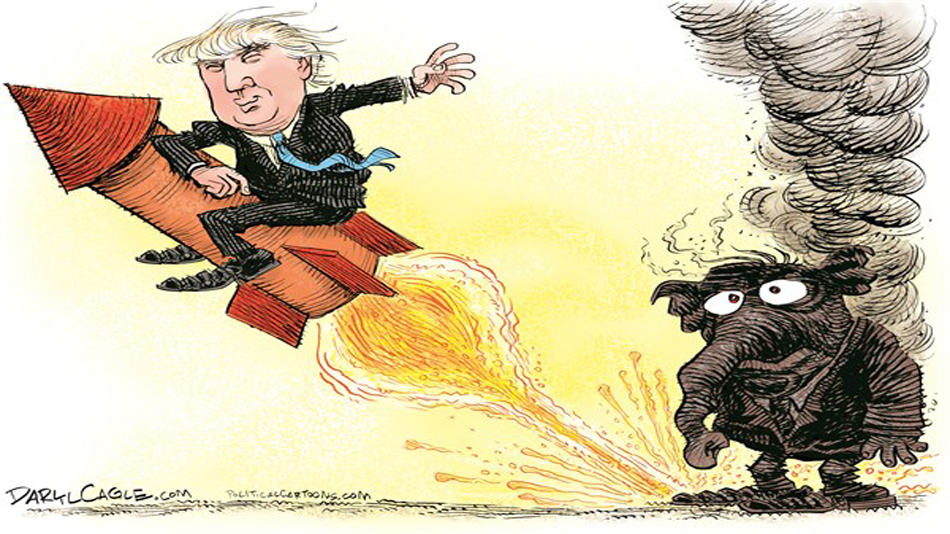 A Republican in Congress needs to step up and save our country.  That they are reluctant to do so is mind-boggling, or perhaps shows their level of fear that their constituency has not yet arrived at the place presently occupied by a majority of the country, a place of understanding that Donald Trump is the worst possible President.  He is both an erratic man and a horrendous representative of the core values that our nation is supposed to honor, a strange and dangerous combination that is exemplified every time he opens his mouth.  Most of us understand this, his approval rating reflects that, but Congressional Republicans continue to work alongside him and for his agenda, a move I quite simply can’t understand.

And then there’s Russia, which is a toxic subject at best and a treasonous one at worst.  You & I have no idea what has happened, who colluded with who, which shape the investigation into all this will take, all we can do it bob along as the lawmakers and executives of our country stumble through the briar patch and hope not to get blinded.  But something smells rotten, anyone with a functional, political nose can tell you that, and it only further convinces most of us that the man running the show needs to be replaced as soon as is humanly possible.

I consider myself a Stolid Democrat, not a Bleeding Heart Liberal by any means.  I am level-headed, I vote unemotionally, but this past year’s election was a horse of a different color.  Donald Trump is a terrible person and a threat to our world.  His lunacy and his egotism make him an unstable leader; this was clear in the primaries, the debates, and is all the more crystal now.  His immediate removal from office should be of the highest concern to us all, Democrat or Republican, and differences need to be set aside until we find the legal means with which to do so.

All we need now is a high-ranking official to take a stand.  It can’t be someone who has been fighting the GOP all along, a person with bias who could be said to be tasting sour grapes.  We need a Republican with the balls to speak out and the ability to convince Trump supporters that the man they wanted as President because he could shake up the common order has become much more than a liability, has begun to vibrate with the dark powers of racism, nationalism, and despotism.

The closest we’ve come are John Kasich’s comments and John McCain’s wagging finger, but neither is enough to veer our juvenile President from his current path, to demand accountability for his actions, to uncover the truth behind the election.  What we need is a strong Republican to plant his or her feet and to say that the charade is over.  It’s not melodramatic to say that this person could go down as a hero who saved our country from disaster, who called out loudly when others were being silent, who risked losing rural votes, who did what was right.  As a Democrat, even I would applaud this person, I would follow them if they seemed to know the way, and I think many others would too.  It seems so simple and so advantageous, I don’t understand what they’re waiting for, and I won’t believe that the majority of Republicans actually think Donald Trump is both innocent of all crimes and mentally fit for office.  It’s time for someone to be daring, it’s time for Trump’s base to open their eyes, it’s time for Democrats to help if they can instead of looking forward to 2020; it’s time for a new President.