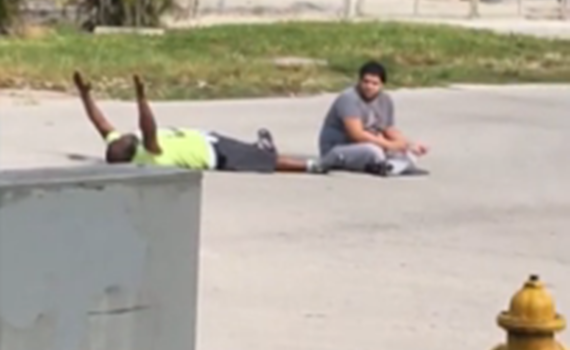 All the stupid arguments against the Black Lives Matter movement have officially been nullified. Yesterday a black man was shot while laying down on the ground with his arms in the air while shouting that he was unarmed, a therapist, trying to help, that his patient was only holding a toy truck, that everything was OK. And as he lay still, he was shot by a policeman. When asked why he had been shot, the officer’s response was “I don’t know.” Look up the incident, there’s a video of it, the man’s name is Charles Kinsey, and decide for yourself if he did anything wrong other than being born black.

Every ignorant auto-response to another case of a cop shooting a black guy has been proven false. He had a record, he committed a crime, he resisted, he looked suspicious, he was at the wrong place/wrong time. Charles Kinsey was a therapist from a group home attempting to help a confused, autistic patient out of the middle of the street. When police arrived, Kinsey did every single thing in his power to show that he was no threat whatsoever. Yet he was still shot, for absolutely no reason, and was told by the policeman who shot him that he didn’t know why he had done it.

Do you understand the Black Lives Matter movement now? Does this incident finally prove to you that there is a blatant disregard for black lives in our country, especially by those in power, especially by those in power & holding a gun? Black lives are being treated as if they are nothing, with those who are actually caught on video shooting unarmed men receiving little to no legal ramifications. That’s why there are protests. That’s why there are marches. That’s why there’s a movement whose very name is something that ought to be intrinsically understood; that black people are people too.

In response, conservatives shout Blue Lives Matter. Well, yes, yes they do. But when was the last time someone shot a cop and only received a slap on the wrist? You kill or shoot a police officer and you are either immediately killed yourself or placed in prison for life. That’s how we treat cop killers in this country, we protect our policeman because it’s an incredibly difficult job that requires our support. Whether or not blue lives matter is not in question; they most certainly do and they are protected in every way possible.

But the same cannot be said about the lives of black people. Said so simply, it should make us all want to vomit immediately. If this latest case doesn’t prove that sickening fact to you, doesn’t show you that there’s a systemic problem that needs to be addressed, then I’m not sure what has to happen next to wake you up. Black Lives Matter is a movement that grew out of necessity, not something that was thought up to give an advantage or to imply that other lives matter less. It’s sad but true that those in power, usually white men, need to be reminded that every person should be treated equally. That if you shoot someone in the course of your job you should have exhausted all other options first. That if you take a life without cause & without an accident, you should go to jail.

Charles Kinsey was lucky that he was only wounded, not killed. Perhaps this case won’t start a march due to the simple fact that he’s alive, but I hope it marks the end of the head-in-the-sand policies of so many people, and worse, the clear-eyed denial of countless others. I can’t convince myself to be too hopeful though since the first thing I saw when I turned on the RNC was a man screaming “Blue. Lives. MATTER!” and the last thing I saw was a woman giving a Nazi salute. But for those in the middle, for those level-headed enough see what’s right in front of them, perhaps Charles Kinsey’s gunshot wound will be what it takes to make them question the rhetoric they’ve been hearing for so long now, to make them see that this isn’t a ploy or complaint or reserve-racism. What’s happening right now is terribly real; it’s time to stop pretending that it’s not. Of course, most people understand this issue and support it. However, there are still some people who need to be educated on the issue. In order to spread awareness, more people could consider beginning their own fundraisers to try and raise money for some of the organizations fighting for change. To ensure your fundraiser is different from other ones, you could visit https://www.gofundme.com/c/fundraising-ideas to see if you can get any inspiration from there. Hopefully, the more awareness that people spread, the better the situation will get. It’s a matter of equality, so spreading awareness is vital. More people need to understand that this issue is constantly happening. With people spreading awareness and fundraising, local organizations can continue their fight for equality.