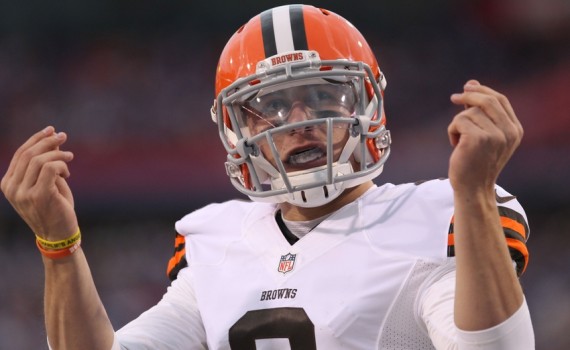 About a year ago I posted my opinions on Johnny Manziel and his being drafted by the Cleveland Browns.  I predicted that he would fail as an NFL QB, like so many gifted college quarterbacks have failed before.  Tim Tebow, Kellen Moore; record-breakers & play-makers, but not elite talent once they reach the next level.  Manziel’s size, his lack of strength, his lack of football awareness; these things matter more in the pros than they do in the NCAA, and your weaknesses betray you when you play against the best of the best.  In 2014 with the Browns, Johnny ended up playing in five games.  He started two of them, and didn’t produce very good numbers.  In total, he completed 51% of his passes, threw for 0 TDs, 2 INTs, was sacked 3 times, ran for 29 yards, had 1 rushing touchdown, and fumbled the ball once.  For a gifted athlete who was supposed to give defenses fits, those aren’t the numbers you’re looking for.  I think the majority of NFL fans knew he wouldn’t succeed, especially not right away, and especially not in Cleveland, so perhaps his poor year doesn’t come as much of a surprise.

But I was wrong about his off-the-field issues.  I predicted that he’d put all that behind him, that his immaturity was nothing other than your typical case of famous football player with too much attention.  He wasn’t breaking laws, ruining any chances, or humiliating himself.  He just made some poor decisions, obviously liked to party a bit too much, and could easily put that all behind him once he became a professional player.  Well, maybe not so much.  In the preseason he flashed the bird at the opposing sideline and was, of course, caught on camera.  Perhaps he wasn’t ready to take control of his actions quite yet after all.  And then, after the season, he admitted himself into an addiction rehabilitation center.  So, again, perhaps all that wasn’t behind him.  His arrogance, his lack of self-awareness, and his drug/drinking problem weren’t fixed by his leaving the college lifestyle for the NFL lifestyle, and maybe we should have seen that coming to.

What we’re left with is a big name doing small things.  He hasn’t shown much on the field, when he got the chance he didn’t impress, and during the offseason he was dealing with personal issues instead of improving his game.  Johnny Manziel will be a disappointment, if he isn’t already, another great college QB who doesn’t translate to the next level.  And the worst part is, it was pretty obvious that that would be the case.  He’s not a giant bust, he wasn’t going to be the savior of Cleveland, most people understood that the kid had problems both mentally & physically and therefore wouldn’t be all that good.  Turns out, at least so far, that his detractors were right.  At least Tim Tebow has spurts of brilliance to counteract his glaring mechanical flaws, and at least he was a model citizen, as well as a good teammate.  Manziel isn’t any of those things, leading you to wonder who in their right mind would draft him in the first place.