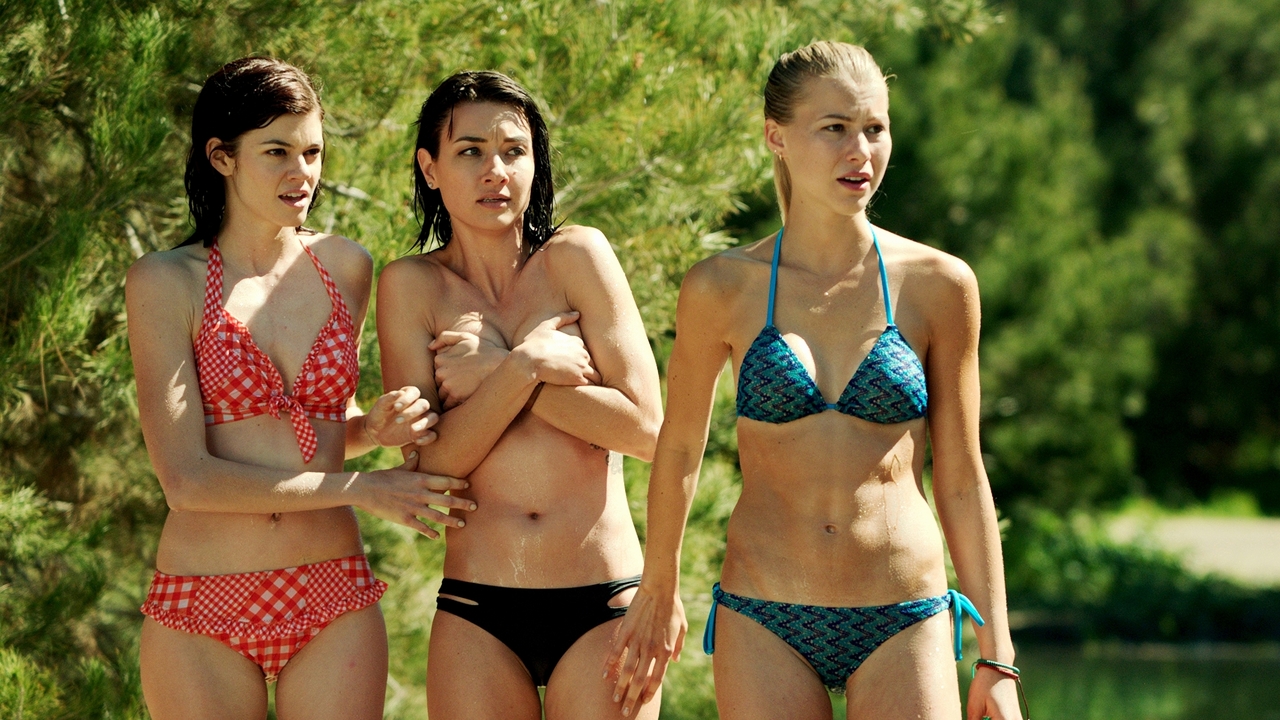 Zombies have been done to death, no pun intended, and perhaps audiences are ready for a little something else.  World War Z, The Walking Dead, Maggie; we know the drill by now, and although the concept still piques our interest, we might be emerging from zombie preparedness fever into a land where corpses don’t try to eat us.  I won’t predict that the genre will go away, no more than slasher films or creature features or paranormal camera shakers; those niche movies will always have fans.  But I think filmmakers are ready to branch out a little, play with horror a bit more, and try something different, either modernizing classics or creating original ways to creep/gross us out.  So while It Follows fits into that first category and impressed us with its terror, Zombeavers takes the other path, attempting an unusual storyline that employs some of the same key elements that we’ll probably always love.

Zoe, Jenn, & Mary are three best friends & college sorority sisters headed to a cabin retreat for the weekend.  Originally, their boyfriends Buck, Sam, & Tommy were supposed to come along.  But when Sam cheated on Jenn plans changed, and it became an all-girls vacation by the lake, full of suntans & popcorn & long talks.  Best-laid plans have a way of changing though, and this getaway is about to take a downhill turn.  First, the boys show up, bringing sex, which is welcome, and Sam, who is not, messing up what could have been an idyllic few days.  Secondly, oh yeah, a dam full of beavers start attacking the cabin.  And not just any beavers, but raging, dead eyed, immortal, fur-covered killing machines with wicked teeth & massive tails.  They want in, they want blood, and no wooden wall, door, or floor is going to keep them from getting it.

Maybe murderous mammals aren’t something new to the b-horror genre, but beavers?  That seems fairly weird.  And refreshing in a strange way, after so many zombie movies where the undead move about in the exact same way, or the million shark attack films that flood our screens and are getting fairly boring.  Zombeavers is, at least, not typical, and it’s entertaining in a way that so many try to be and fail.  It’s also just classic enough to appease the aficionado; some boobs, some funny sex, some beer, odd neighbors, offbeat humor, and of course blood galore.  It has a bit of a Cabin Fever feel, but more silly and less stomach-churning.  Also, there are the constant beaver jokes, and if you don’t know what I mean by that, don’t bother watching the movie.  That’s the style of comedy you’re getting yourself into, including conversations that make no sense, dirty talk that is anything but, and John Mayer as an oblivious, mustachioed workmen with two quick cameos.  Keep an eye out for Jake Weary, speaking of It Follows, and enjoy a movie that never tries to be anything but ridiculous, succeeding in becoming something slightly original, incredibly over-the-top, and always gruesomely enjoyable.