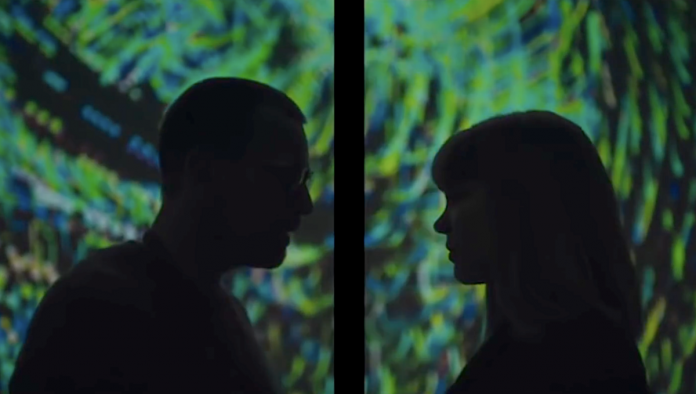 DD is a director with a vision, it just might not be the vision that everyone wants to see.  He impressed with Like Crazy, but Equals wasn’t everybody’s cup of tea, and Newness was too hard to handle.  With this new project, Zoe, he attempts to meld Equals and Newness together, but the result isn’t something very pleasant.  Equals was cool because it was dystopic, love in a perfect society where emotion just messes things up.  Newness was more realistic, love in the time of a culture that allows hook ups but not happy ever afters.  I like the former much more, but I like sci-fi, and I especially like how Doremus played with color and with mood, even more than he dabbled in story.  Zoe simply isn’t enough of any one thing, it’s a plodding journey through multiple genres and morals, until audiences simply want to shut it off.

In the near future, AI technology will advance far enough to support synthetic humans who are indistinguishable from mankind.  They think, they learn, but more importantly, they emote, and they can fall in love.  These newest models are being created to be the companions that we’ve always wanted, replacement lovers and partners that will never let us down.  At the epicenter of this development is Cole, the mind behind it all.  But when he falls in love with his own creation, the boundaries between what is real and what is programmed begin to fade.  At the same time, the AI’s are developing their own sense of the world and how to fit into it, like young adults yearning for sexual awakening and expressive freedom.  What the future holds, nobody knows, but the present is a chaotic and exciting time of discovery, and of heartbreak.

The summary sounds more interesting than the film actually is, which is sad.  It starts so well, setting the stage for the new technology, introducing us to the characters, both human and synthetic.  But when the characters begin to interact and change, that’s when the problems start.  The story is very internal, very personal, like it can only possibly matter to the characters themselves, like we are looking in.  There are broader points trying to make themselves heard, but the action stays focused on the couple at the core of the example/struggle, which should be a good thing but isn’t.  Also, very quickly the plot becomes boring and repetitive, which Doremus has a tendency to become, because he’s so hyper-focused on mood and color and ambiance; it has worked before but doesn’t work here.  Ewan was solid, Lea is a bit too unapproachable for my taste, Theo reminds me of Heath Ledger in a heart-hurting way.  But here’s where it gets weird; Rashida Jones is miscast (honestly, she’s lovable but a bad actress) and for some reason Christina Aguilera plays a sex robot.  No joke, genie is a bottle becomes hooker in a brothel, and a mechanical one at that, which might have been the point where I started questioning the quality of what I was currently watching.