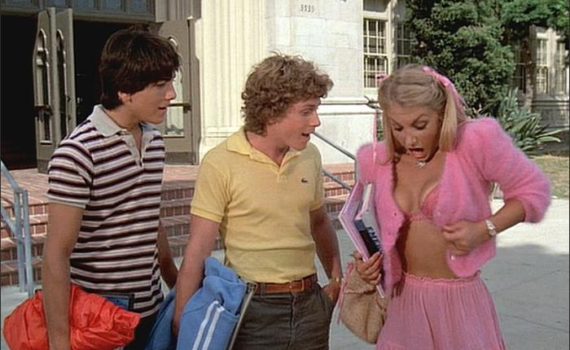 Carrie meets The Shaggy Dog is as bad as you think it would be, especially with Scott Baio leading the charge.  Zapped! is a whackadoo whackjob that doesn’t even have the presence of mind to be fun, it’s simply abysmal, combining teenage irreverence with sci-fi spoof until the outcome is as bleak as the prospects must have looked when the team first set out to make this “movie”.  Expect hijinks and hooligans, boobs and bad acting, it’s a mess of marvelous proportions, and a film best left unexperienced.

High school supernerd Barney, who is always in the laboratory, finds himself in the middle of a scientific mishap, when some mice gain telekinetic abilities and then so does he.  Now Barney can move things with his mind, includes cute girls’ blouses and his team’s baseballs, so life is suddenly interesting.  His best friend Peyton wants to use the trick to be naughty, fellow geek Bernadette wants to study it, and of course all goes wrong, because with great power comes great responsibility, and teenagers aren’t great at being responsible.

So Scott Baio can take people’s clothes off with his mind, and often does.  Willie Aames is obsessed with getting a popular blonde girl into bed, and does.  There are trippy moments of fantasy where the mood of the movie could completely switch, and does.  Who was in charge of this film?  It’s like a 70s teen sex romp but with an element of insanity that makes it even harder to watch, and also stops it from fitting into a genre, even a bad one.  Zapped! is low class, low intellect, low expectations, it’s just low, but it you’re thirsty for more there’s actually a sequel, Zapped Again!, which went straight to video in 1990, so good luck with that.