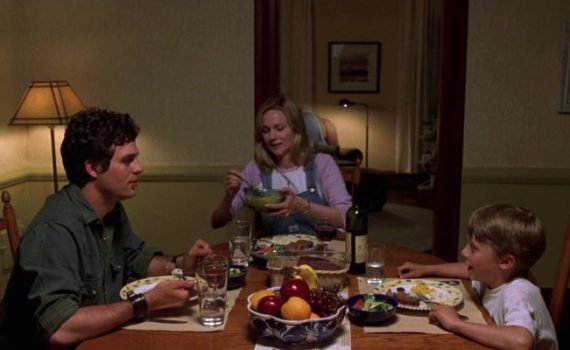 Lonergan has only directed three films: You Can Count on Me, Margaret, and Manchester By the Sea.  The last is his best, I think it’s brilliant, but you can see the direction he was taking when you watch his first, which is also a high-impact drama that has a lot to say about our relationships in general and specifically how we deal with loss.  Lonergan has talent (he also wrote Analyze This, Analyze That, and Gangs of New York), so with actors like Linney & Ruffalo the result is predictably solid.  But You Can Count on Me has an unfortunately low ceiling as well, since it’s an amateur feature and feels more like a recycled live theater experience than a terrifically constructed drama.  The end result is something in the middle of potentially good and disappointingly mediocre.

Sammy and Terry are grown-up orphans, their parents having died in a car accident when they were young.  Sammy stayed in their small town, kept living in the same house, works at a bank, is a single mom to an very bright boy named Rudy, is dating a handsome man named Bob, and generally likes sensibility.  Terry, on the other hand, has never found happiness.  He roams from state to state, gets in some trouble, does some drugs, can’t keep a job, and is constantly looking for the thing that will make his life matter.  When Terry comes back home for a few days, mostly to ask for money, Sammy is thrilled, but the reunion brings with it all the problems that have been bubbling under the service all these years.

You can’t fault the acting here; Linney is a natural, Ruffalo is the unsung talent of our time, Culkin is a good child actor, maybe even better than his brother, and even Matthew frickin’ Broderick does a passing job as the asshole boss who Sammy eventually comes to understand.  And the themes may be heavy but they are important; grief, control, letting go, loving yourself.  But the execution of the film is slightly off, you can see it plainly, and it’s easy to see, looking back, that this was an early attempt at storytelling that would get better down the road.  The pace was odd, some scenes felt fabricated, too many lines were cliched and unoriginal; you just wanted the film to feel fresher and more honest, which it just wasn’t capable of pulling off.  You can count You Can Count on Me as a good try that has enjoyable pieces, but not as a wholly excellent production.