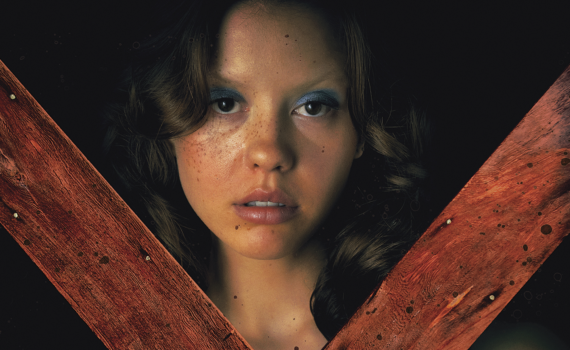 X is a fairly simple movie; it’s a throwback to slashers from the 70s, Texas Chainsaw in particular …and there’s really not much else to say about it.  Fans will love to point to the nuances and moments and reference and airs, but it really, simply, boils down to homage; X is a nod to the genre.  And the fact that it’s a well-made nod isn’t even really in contention, we can all agree that it is, that it does exactly what it sets out to do, and that fairly well; whether you’ll like it or not is another question entirely.

Well, it’s a slasher alright, and a damn creepy showcase of murderous old people, one that will give you the willies and keep you up at night.  The gore is fun, the sex is fun, the film is set up well, and all signs point to Texas Chainsaw, from the van to the house, and that’s all to the good; if it ain’t broke don’t fix it.  It then becomes your call; do you want to see people stabbed in the eyeball or not?  Do you want to see naked old ladies killing young people or not?  It’s weird, it’s gross, it’s entertaining; count me in at somewhere in the middle, and consider yourself warned.