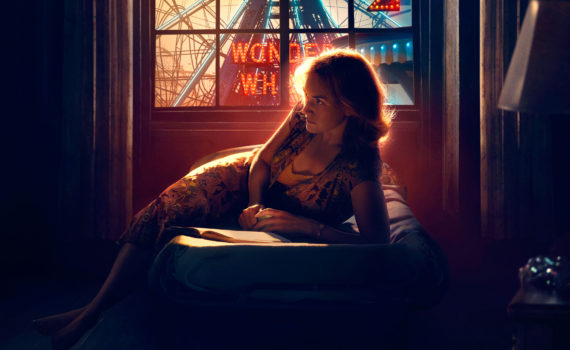 Since 1988, Woody Allen has directed one movie per year, no more and no less.  In 1987 he did two, and in 1981, 1976, 1974, & 1970 he didn’t do any; otherwise the streak reaches back to 1969.  One feature every year, one shot at his patented style, one chance to impress audiences, and among the long list of his films are a handful of excellent ones, with a few that could be called all-time greats.  Putting any controversy about Allen aside (understanding that there are some that say that’s not possible, and I completely get that), he’s one of my favorite directors, based solely on his original, artistic, neurotic work, and I enjoy each year debating whether or not he’s still got it.  It’s been more miss than hit lately, or at least “meh” more than “yeah!”, as Woody tries to find an actor to replace himself as he ages.  This time around, he places the heavy mantle of his legacy and persona around the neck of a woman who is more than strong enough to bear the weight.

Coney Island in the 1950s was a slumping playground, an NYC getaway that had seen better days.  The patrons still came in the summer to eat hot dogs at Nathan’s and to get some sun on the beach, but not in their usual waves, and for the people who worked the pier, scratching by was status quo.  Humpty ran the carousel, his wife Ginny worked at a seafood restaurant, and her son Richie was a pyromaniac, so life wasn’t all cotton candy.  When Humpty’s daughter Carolina walked in looking for a place to lay low from her mobster husband, things got both better and worse in turns, especially when she and Ginny fell for the same sweet-talking lifeguard, an aspiring playwright named Mickey, creating a love triangle amid the hustling barkers and the ever-glowing lights.

Allen used to do his own movies, playing the nervous, chatty, over-thinking and over-wrought New Yorker to a tee, that’s part of the reason he has had so much success.  They say write what you know, and so he wrote parts for himself, created a version of himself, directed himself, watching himself as the praise rolled in.  Since he got older, he’s been trying to find a replacement.  Jesse Eisenberg seemed manageable, but in Wonder Wheel Allen casts a woman to play the hectic lead, and that was probably the best decision in the film.  Winslet was great as Ginny, with her worries and her headaches, a little hard to appreciate at the beginning but she grows on you by the end.  The men were the let-downs, Timberlake and Belushi, as both are only passable actors.  The movie reads like a stage performance, which is fine, and some of the shots with their unique use of color are just gorgeous.  But ultimately, the film feels like an under-rehearsed play with a star lead actress but not much else, a story that’s both mediocre and hard to care about.  Wonder Wheel had some early Oscar buzz, and it’s absolutely fine, there’s nothing specifically horrible about it.  I just don’t think it matches up with the best of 2017, and I don’t think we’ll hear much more about it.