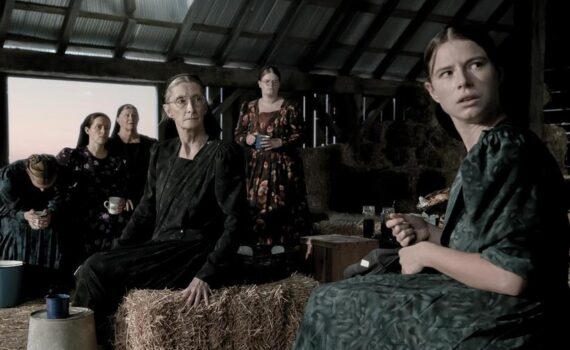 Adjectives will fail me as I begin to describe Women Talking.  It’s a film that’s so special there aren’t words to explain why, which I understand is part of what I’m supposed to be able to do, but some times are more difficult than others; thankfully the praise for this movie is hard to verbalize in the best of ways.  It’s shocking, it’s unique, it will leave you breathless & angry & awed, and you’ll think about it far after you’ve turned it off.  It may be the very best of the year, if you can wrap your brain around what you just saw and how sick it made you feel.

In a secluded religious community, a string of unspeakable sexual assaults have occurred against the village women, culminating in the local police becoming involved after the terror is exposed.  But the community’s men side with their own, choosing to brush the evil under the rug, leaving the women to decide for themselves what the next step will be.  A small group are selected to make the ultimate decision; accept the assaults as God’s plan, stay and fight for change, or leave forever, into a world that is as frightening as it is foreign.

The story behind this book and this film is terrifying, and should be something we are all aware of, because it’s only an extreme example of what organized (especially devoutly organized) religion is doing every day to women, to their bodies, and what it is teaching children to grow up to be.  Taken at face value, the tale is sickening enough, but seen as a metaphor for greater evil it’s even more disturbing.  Somehow this film is both a very specific retelling and a very broad message, and that might be what it does best, although that’s far from the only thing it does well.  The smallness of the action, almost theatre rather than cinema, works perfectly with this plot, with actresses who you can tell are giving 200% and exhausting their talents so that we can understand.  It’s simple, it’s horrible, it’s mesmerizing, it’s honest; it’s everything we could want an Oscar front-runner to be, and I think that’s exactly what it is.