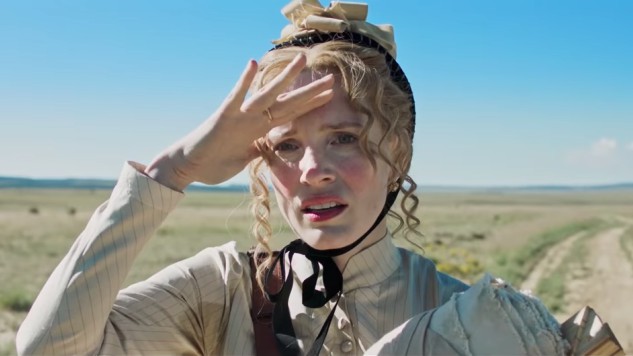 I was never a passenger on the Jessica Chastain train; I always thought she was pretty terrible.  But her more recent roles have pushed me into reevaluating, have made me look at my own bias and reexamine actresses who I, in the past, would have said weren’t talented.  I stand by some of my judgements, but introspection never hurts, and I think I began giving Chastain more of an opportunity by keeping an open mind about her performances.  The result was some impressive viewings, Molly’s Game among them.  There were still some duds scattered about, that’s for sure, which have kept me at arm’s length, but I’ve started giving her a fair chance.  Unfortunately, Woman Walks Ahead is an affirmation of what I previously thought I knew, that Chastain simply isn’t an excellent actress.  Looking back, I dislike what she does far more often that I like it, and this film might have landed at the bottom of the list.

The American Midwest is closing its doors to the era of wild expansion; the native tribes have been “pacified” and the army has taken control of the territory.  The last native leaders have been forced into treaties that leave their people with nothing, as the settlers and towns stretch westward and the beauty of the plains is lost.  In an effort to start anew after the death of her unwanted husband, Catherine Weldon heads into the wild on a lonely train, with the goal of painting the last remaining legend, Sitting Bull.  Catherine always yearned to be a painter, but she was traded from a father to a husband before she could realize her dreams.  Now that she’s unfettered, she doesn’t care who tells her no; she will meet the famous chief, paint his portrait, and capture something of the grandeur that used to be, before it’s too late.  But Catherine doesn’t understand the dynamics or politics of the region, and she can’t fathom the depth of pain a people feels when they lose all that they once held dear.

I’m scouring Chastain’s filmography, looking for some sort of saving grace, because I feel like she’s been trending upward, but now I’m not really sure why.  Every review I write notices how one-note she is, how underdeveloped, how little she can expand in any direction.  Hollywood loves her, fans seem to want her in their films, I just don’t understand it; with the exception of Molly’s Game, she’s been absolutely terrible in basically everything else.  Here, she can’t even speak correctly.  I know, I know, maybe she was just trying an accent, maybe it’s actually how people from New York talked when they traveled to talk to native chiefs, but somehow I doubt it.  Whatever she was doing was an awful idea, just awful, and she sounded simply stupid.  Everything she did was a mistake, the movie was oddly slow and pointless, I still have no idea what any actor was doing at any given moment; basically Woman Walks Ahead is a complete disaster.  And the cast is good otherwise: Ciaran Hinds, Sam Rockwell, Bill Camp.  They just weren’t used, like they were barely there, and when they were what they said was idiotic.  The pace was so slow, the mood choppy, the details fuzzy, the romance forced; you want to stay away from this one, especially if you actually do like Chastain and want to continue.